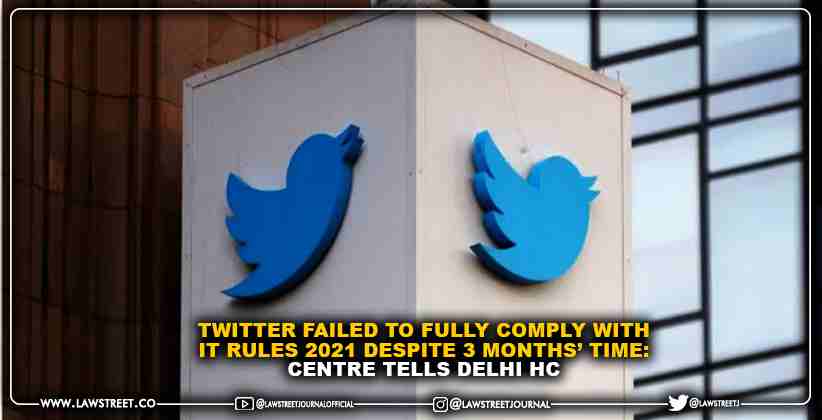 On July 5,2021, the Central Government told the Delhi High Court that despite the three months granted to all-important Social Media Intermediaries (SSMI), Twitter Inc has not fully complied with the 2021 IT (Information technology) rules.

The deadline for compliance with the new regulations was May 26, 2021.

In an affidavit filed before the Delhi HC, the Centre stated that Twitter Inc has failed to comply with the IT Rules, as of July 1, 2021.

The Ministry of Electronics & Information Technology (MeitY) in its affidavit stated that Chief Compliance has not yet been appointed, the position of the Resident Grievance Officer is vacant, the position of the Nodal Contact person (even if it is a temporary basis) is vacant, and the physical contact address, which was supposed to there on May 29,2021 is not available on Twitter website.

The Centre also stated that any non-compliance amounts to a breach of provisions of IT Rules, leading to US-based Twitter losing its immunity granted under section 79(1) of the IT Act, 2000 which says that anything contained in any law for the time being in force but subject to the provisions of sub-sections (2) and (3), an intermediary shall not be liable for any third-party information, data, or communication link made available or hosted by him. It stated that the IT Rules, 2021 are the law of the land and Twitter Inc must abide by them.

Recently, Twitter Inc told Delhi High court in its response that the Interim Resident Grievances Officer of the microblogging website had withdrawn his candidacy on June 21,2021 and was in the final stage of appointing a new person for the position of Resident Grievance Officer.

The company stated that it is in the final stages of appointing a replacement and, at the same time, the complaints of Indian users are being addressed by the Grievance Officer.

In response, The Centre and Twitter have submitted petitions alleging non-compliance with the Information Technology (Intermediary Guidelines & Digital Media Ethics Code) Rules, 2021, in which the Delhi HC had issued notice.

Senior Lawyer Sajan Poovayya, appearing for Twitter Inc, had told the HC that they were unable to comply on the date of filing of the petition but now Twitter has followed the rules & appointed Resident Grievance Officer.

The Court is hearing a petition asking the Central Government to issue the necessary instructions to Twitter Communication India Private Limited and Twitter Inc to appoint a Resident Grievance officer by Article 4 of the Information Technology Rules (Intermediary Guidelines and Digital Code Ethics) of 2021 without delay.

The petitioner stated that he has filed a petition against Twitter Communication India Private Limited and Twitter Inc's non -compliance with the information technology (Intermediary Guidelines and Digital Media Ethics) rules, and seeks the corresponding writs or instructions against Respondent Centre Government and Twitter to perform its statutory & executive duty under Information Technology (Intermediary Guidelines & Digital Media Ethics Code) Rules, 2021.

According to Rule 4(c) of the IT Rule, every Significant Social Media Intermediary has to appoint a Resident Grievance Officer, who shall subject to clause (b), be responsible for the functions referred to in sub-rule (2) of rule 3, stated the petition.