10 Bizarre laws from around the world! 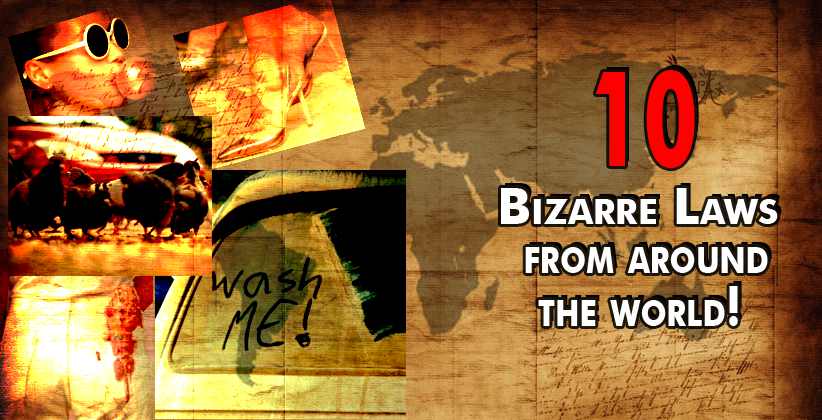 International Jan 06, 2021 Akanksha, Intern Aquilas Legal Solutio ( Editor: Ekta Joshi ) 1180 Shares
1,180 Shares
Laws are basically framed to govern a community or country by regulating the actions of its members. However, there are some laws that are bizarre beyond imagination and blatantly implausible, and there could even be a hefty fine imposed upon you if you breach them! Have a look at some of the crazy laws from across the globe. Wait till you get to the last one.1:   Illegal to chew gum?  Singapore’s ban on the sale of chewing gum is possibly the most internationally well-known law in the world and has attracted a lot of international media attention. In 1992, the ban was introduced by the President, Goh Chok Tong, and there were strong opinions for and against the ban. A city obsessed with cleanliness, the sole reason for introducing the Singapore chewing gum ban was to keep the city clean. Thanks to the Singapore-US Free Trade Agreement 2004, the rule is now a bit more lenient than before. Now, chewing gum with health benefits such as nicotine gum and dental gum can be bought from pharmacies.2:  Don’t feed the pigeons in San Francisco When you feed pigeons, you are not doing them a favour. They lose their natural ability to scavenge and survive on their own. Pigeon over population leads to overcrowded, unsanitary conditions and produces sick and injured birds. It’s against the law to feed pigeons on the streets or sidewalks of San Francisco (Sec. 486. M.P.C). Violators may be cited and fined. You can help keep your neighbourhood safe and clean and the pigeon population under control by not feeding pigeons.  3:  Wearing pointy heels banned!  It is illegal to wear pointy heels in Greece at certain monuments, including the Odeon in Athens and the Acropolis in Attiki. Archaeologists say the killer stilettos will “poke” the marble in the 200 year old sites, putting them under a substantial strain.  4:  Ice cream in your back pocket is a no-no in Alabama.  It’s True! In Alabama, If you’re caught sticking an Ice Cream Cone in your back pocket, you could be THROWN IN JAIL! Some sources claim that the Alabama one is indeed false, but then says it’s real in Georgia and Kentucky. I can’t find solid proof there either, though I found the alleged reasoning behind it interesting: Horse Theft. Back when most people got around on horseback, horse thieves would put ice cream in their pocket to lure horses away without being charged with stealing. 5:  Dirty car offence in Russia Yes, you did read that one correctly. Hidden away in Russia’s driving laws it is decreed that a dirty car is an illegal car. Although, this law against filthy cars is either ignored by the entire population, or ruthlessly enforced. Frankly, the Russians have more to worry about on their roads than messy cars.   6:  Make Ugly Faces at Dogs, Go Straight to Jail! This certainly stands out as the kookiest law. In Oklahoma, you cannot make ugly faces at dogs. If you do so, you may have a fine imposed or even may lead to jail. Come on dogs, show us the culprit.  7:  Illegal to leave your house in Thailand if you’re not wearing underwear.  Reason why? “Section 388 Whoever, doing any shameful act in public by indecently exposing one self’s person, or by committing the other indecent act, shall be fined not out of five hundred Baht. This idea may have derived from an older law, that banned only wearing underwear. On 15 January 1941, it was decreed that “Thais should not appear in public, populous places, or municipal areas without proper clothing”  8:  Flush before 10 pm.  Switzerland has so many other unbelievable rules and regulations. The curfew on flushing toilets after 10:00 PM is quite a strict regulation of Switzerland. Nobody actually knows the real reason behind it, but it seems from 10 PM to 7:00 AM you are not allowed to make any considerable noise, as it is called peaceful times.  9:  It is illegal to own only one gold fish.  In Switzerland, it has been illegal to own one solitary goldfish since 2008, when the country introduced a whole host of animal rights’ legislation Why? The Swiss government believes it is cruel to force them to live in isolation. Fish are actually ‘social’ creatures. In the sea they swim in shoals, so it makes perfect sense that they would need companions. According to the RSPCA, they can be seen regularly interacting with each other when they’re in groups. The organisation recommends keeping at least two in a tank so that they can provide each other with companionship as ‘solitary fish can exhibit depression and lethargy’.  10:  Illegal to Die in Certain Cities?  It is illegal to die in at least two cities in Italy, and also several other cities around the world. In part, this has to do with depopulation and aging towns, but also addresses local health crises. In the case of Sellia, Italy, residents who fail to take preventative death measures by getting an annual health check-up will be fined 10 EUR per year.