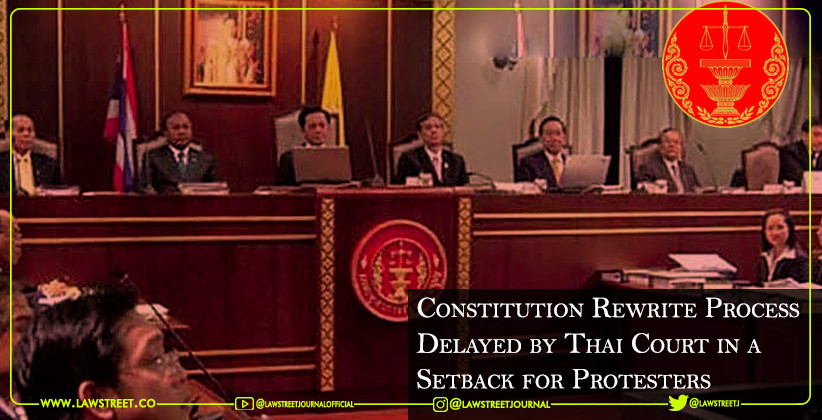 International Mar 13, 2021 Aditi Aggarwal ( Editor: Ekta Joshi ) 3 Shares
3 Shares
A Thai court on Thursday (March 11, 2021) ruled that a national referendum must be held before parliament could rewrite the constitution, delaying changes demanded by anti-government protesters. Court did this as a setback for protesters.

“Lawmakers can rewrite the constitution if voters decide an overhaul is needed, and another referendum must be held after the rewrite is completed,” the Constitutional Court said in a statement.

Background of the matter:Parliament last month sought the court’s view on the legality of rewriting the charter, which was drafted under a military regime led by coup leader-turned-premier Prayuth Chan-Ocha, after which the above ruling came. A youth-led protest movement has demanded his resignation for months while also calling for reforms of the monarchy, which sits at the apex of power in Thailand. Since July last year, activists have staged mass gatherings to demand a rewriting of the charter, which they viewed as instrumental in helping Prayuth and the establishment retain power after the 2019 elections.
The parliament was due to vote next week on a plan to form a committee to rewrite the constitution, avoiding any chapters relating to the monarchy. The protests have broken long-held taboos on publicly criticizing the royal institution. Paul Chambers, a lecturer at Naresuan University’s Center of Asean Community Studies in northern Thailand said:

“Even though the court allows the rewrite, this is going to be a long, drawn-out process that leads nowhere.”

“The constitutional drafting assembly will likely be dominated by arch-conservatives, and the lower house and the Senate are likely to create as many obstacles as possible to slow down any real changes.”