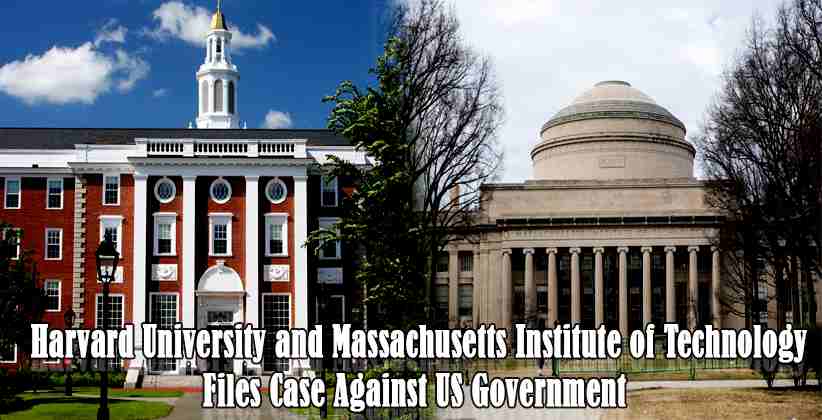 International Jul 10, 2020 Ghazal Bhootra  ( Editor: Ekta Joshi ) 0 Shares
0 Shares
Harvard University and Massachusetts Institute of Technology (MIT) have recently taken to court a lawsuit against Trump-led United States administration over its new directive asking international students on F-I visas taking online classes only to leave the United States amid the COVID-19 pandemic. The suit is filed under the name President and Fellow of Harvard College and MIT v. US Department of Homeland Security and others.

The directive, that also prohibits students outside the United States at the moment from coming into the country, has been called by Harvard and MIT as "arbitrary, capricious and an abuse of discretion". This directive was issued on July 6, 2020. Before this directive, the ICE of the US government had mentioned that students holding non-immigrant visas could be present at remote classes while maintaining their F-1 status within the period of the pandemic. But this was overruled on July 6, 2020.

Furthermore, ICE proclaimed that educational institutions whose classes would entirely be held through online platforms were mandated to submit an “operational change plan” no later than July 15, 2020, which was nine days after the announcement. The plaint issued in the Massachusetts District Court contends that the notification of ICE is contrary to the Administrative Procedure Act, 1946 on the given grounds: "The effect—and perhaps even the goal—is to create as much chaos for universities and international students as possible." As plaint also further mentions, "By all appearances, ICE’s decision reflects an effort by the federal government to force universities to reopen in-person classes, which would require housing students in densely packed residential halls, notwithstanding the universities’ judgment that it is neither safe nor educationally advisable to do so, and to force such a reopening when neither the students nor the universities have sufficient time to react to or address the additional risks to the health and safety of their communities." ICE has gone through with the change without any consideration for the health of the students, the faculty, university staff, or communities, mentions the suit. "Just weeks from the start of the fall semester, these students are largely unable to transfer to universities providing on-campus instruction, notwithstanding ICE’s suggestion that they might do so to avoid removal from the country", states the plaint. Returning to their native countries to attend online classes is impracticable, prohibitively expensive, dangerous, and impossible for the students, the plaint adds. There is also an issue with the time difference. The Universities are asking for an interim restraining order and preliminary and indefinite injunctive relief warding the US authorities off from imposing the policy announced in ICE’s Directive or propagating it as a final rule. Wilmer Cutler Pickering Hale and Dorr LLP, a litigation firm is representing Harvard and MIT. Over 202,014 Indians studying in universities across the United States are likely to be affected by the policy. As an interim relief, the US Department of Homeland Security supposedly announced a scheme to ad interim modify F-1 & M-1 non-immigrant visa requirements for the fall 2020 semester.   [READ COMPLAINT]