An overview of the political battle between Armenia and Azerbaijan 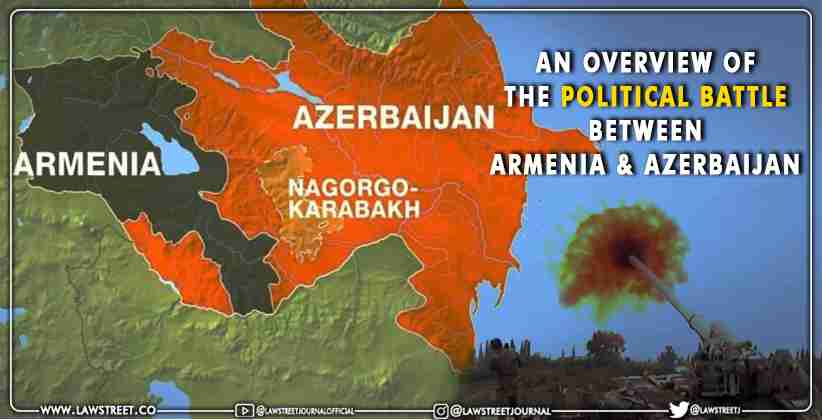 “Armenia, Azerbaijan on the brink of full-scale war”, “Has World War 3 Already Begun?,  "The entry of superpowers almost certain in the ongoing Azerbaijan-Armenia war!” - the international media was flooded with such news headlines last year in September with the apprehensions of a war between two countries turning into a world war.

This century old dispute still remains unsolved and has become a challenge to global peace and security. The dispute is all about a territory named, Nagorno-Karabakh, a mountainous and forested region dominated by ethnic Armenian population and also has a small population of Azeris.

Both sides have their solid claims over the land and this has often resulted in armed and violent clashes between the two.  Azerbaijan is a muslim dominated country with 94% Islamic population, and on the other hand Armenia is a Christian dominated country with over 97% Christian population. But both the countries allow citizens to practice the religion of their own choice.

The roots of this conflict date back to the 19th century when this region was under the Russian empire. After the fall of Tsarist regime in 1918, the ethnic Armenians and Azeris formed two new countries and immediately after this the struggle for Nagorno-Karabakh started and both sides claimed the region.

The region has since then been under immense tension. The situation got further tensed due to the involvement of monetary interests of other nations like Turkey and Russia.

Violent clashes begun between the two nations on 27th September,2020, both blamed each other for targeting civilians. Both sides used Heavy drones and heavy artillery guns which they purchased from none other than Turkey and Russia, both powerful nations have their vested interests in the oil and gas resources of the region and saw the conflict as an opportunity to earn a handsome amount of money.

The war between Armenia and Azerbaijan continued for over more than a month, thousands lost their lives on both sides including innocent civilians and finally on November 8,2020 Azerbaijan declared victory and Armenia surrendered.

As a result many Armenian territories shifted to Azerbaijan but still some areas remained under Armenian territory. Both Russia and Turkey sent their peacekeeping forces to ensure peace in the region. The only countries to be benefitted by the conflict are Turkey and Russia whereas the warring countries incurred huge loses and the conflict still remains unsolved. This conflict gave a clear message to the contemporary world politics that war is absolutely not a solution to any conflict. Rather the countries involved should try to resolve the issue at bilateral meetings within their sovereign interests and without involving any third party. So to say, any involvement of foreign power could just complicate the issue furthermore.