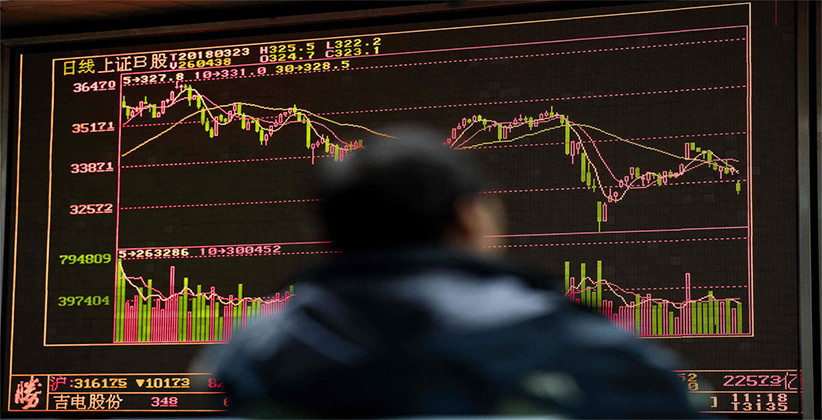 The Chinese equity markets returned on Monday the 3rd of February, 2020 after the extended Lunar New Year holiday break, diving to a 9% low at the open, as the traders played catch up with the mounting Coronavirus concerns in China and across the globe. Businesses in China remain shuttered and travel bans mount, crude oil and shares in Australia and Japan also take a hit after it.

The Stock markets in China have seen the biggest daily fall for five years as traders rushed to sell amid continued fears about the impact on the global economy of the Coronavirus epidemic. The Shanghai Composite index fell to a 9% gapping to lower to reach 2,716.70, the lowest level since mid-Feb 2019. The index is off the multi-month lows, but still down 7.50% around 2,760 levels, at the time of writing surmounted on a wave of negative sentiment that has been built for 10 days during the long market shutdown for the lunar new year. The index was off 9.1% and very close to the maximum permitted fall of 10% after which trading is suspended.

In additional efforts to counter the negative economic impact of the coronavirus outbreak and spread, the People's Bank of China (PBOC) slashed the interest rate on 7-day reverse repos (RR) to 2.4% from previously at 2.5% and on 14-day RRs to 2.55% vs. 2.65% previous. The PBOC also injected CNY900bn via 7-day RRs and 300bn via 14-day RRs. On the fx front, The Chinese yuan tumbled to the weakest in five weeks against the greenback, as USD/CNY skyrockets to 6.9945. The cross rallies 0.85% on a daily basis. The USD/JPY pair extends its rebound above the 108.50 level while S&P 500 futures jump 0.75%. The benchmark US 10-year yields are up 1%, driving the greenback higher across the board. Meanwhile, gold prices are on the back foot below $1590.

The Chinese authorities have reeled off a series of measures to tackle the market panic. On Sunday, 2nd February, 2020 they announced they flood the financial system with 1.2 trillion yuan (US$170bn) in extra liquidity, a measure designed to buy up securities from investors seeking to sell. On Monday, 3rd February 2020, the People’s Bank of China, the central bank lowered the interest rate it charges banks for short-term funding upon which many banks rely to remain trading.

Capital Economics said that while the move might take some pressure off the banks the rate cut was not enough to offset the drag on economic activity from the coronavirus outbreak and that more rate cuts were therefore on the way.

The contagion has spread to more than 20 countries around the world and led to travel bans on Chinese citizens to the US, Australia, New Zealand and several other nations.

The growing fears about the Chinese economy also prompted the finance ministry to subsidize on interest payments for some companies hit by the coronavirus outbreak, state-run newspaper Guangming Daily said on Monday,

The epidemic has affected the rest of Asia Pacific, with the Australian benchmark with a heavy calling of S&P/ASX200 index closing down 1.34%. The Nikkei in Tokyo finished down 1% although the Hong Kong market was up 0.26%. Hardest hit in Australia was the energy sector, with the index down 3.77% after 15 minutes of trade as the oil price continued to suffer from the prospect of a prolonged slowdown in the world’s second biggest economy. With Australia’s close economic ties to China through its huge exports of iron ore and metallurgical coal, the Aussie dollar slipped to US66.87c, down from 67.19c on Friday. Safe havens of gold and government bonds continued to benefit as investors shied away from risk.

After just minutes of trading on Monday morning, a range of China-traded commodities fell by the maximum allowed in one day. The Australian tourist and education industry is also heavily dependent on China. The travel ban on foreigners entering from China could knock 0.2% off economic growth this quarter according to AMP economist Shane Oliver.

Most global attention was focused on trading in Shanghai and Shenzen and what it reveals about the state of the country’s economy. Many economists are predicting the impact on the Chinese economy will be massive due to the majority of business being on a lockdown and also due to the suspension of overseas airlines.

Goldman Sachs has laid a forecast that the virus could knock Chinese growth down to 5.5% for the year, from 6.1% in 2019, with knockdown effects for the rest of the world economy.

Economists at Citigroup said the steps taken by Chinese authorities were “unlikely” to be enough to prevent a sharp downturn in the first quarter.

“As most employees won’t return to work until 9 February,” they said, “the output losses are likely to be larger than expected, and incoming economic activity data will continue to prompt the authorities to take more actions in order to reduce the adverse impact of the Wuhan coronavirus on the economy.”

Amid the latest coronavirus update, “the number of confirmed cases of the coronavirus worldwide is now 14,557, most of which are in China. This follows last week's emergency warning from the World Health Organization (WHO) ad the data is according to the agency.