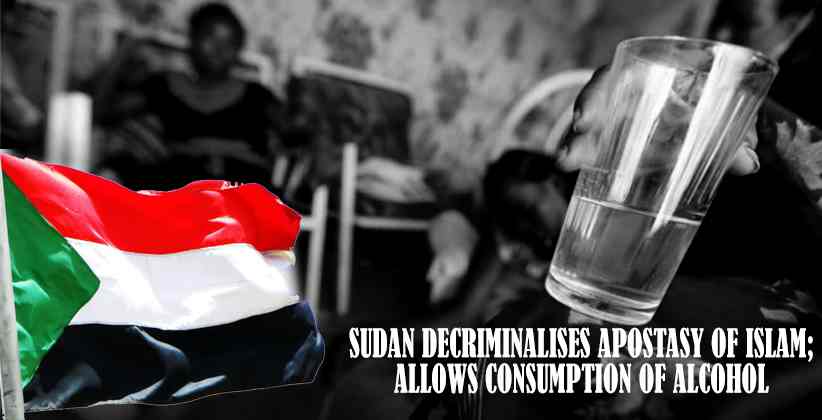 The North-east African nation of Sudan is infamous for its intensive regime and rigorous laws. A heavily Islamic country population-wise, it shares its borders with countries like Egypt and Libya. With a population of more than 4 crores, the country observed a political crisis involving mass protests and genocide in 2018-19.

The country is now allowing non-Muslims to drink alcohol. The law criminalizing the activity has existed for decades and is being scrapped down. Laws pertaining to leaving the religion are also being removed. The justice minister said that these laws made apostasy punishable by death. A female was sentenced to death for converting to Christianity in 2015 resulting in a mass outcry for amendment of the laws.

These laws come a year after Omar-Al-Bashir was removed from power for imposing a state of emergency in the country due to the ongoing financial crisis. The military took over and a heavy tussle between the army and pro-democracy protestors followed. Bashir’s reign lasted for around three decades and faced a lot of criticism for not taking actions against bad activities prevalent in the country like Female Genital Mutilation.

The Justice Minister Nasredeen Abdulbari stated in an interview broadcasted on 11th July 2020 that the state will allow non-Muslims to consume alcohol on the condition that it shouldn’t disturb public peace. In the same interview, he also announced that conversion to another religion will be decriminalized.

"No one has the right to accuse any person or group of being an infidel... this threatens the safety and security of society and leads to revenge killings,"

This decision is important as Islamic tradition forbids the consumption of alcohol and this practice was imposed on the Christian minority in the country as well. The current regime is a transitional government which came in power after the political crisis. Islamic countries tend to impose laws that make leaving the faith punishable. These laws came into force in Sudan when Bashir came to power in 1989 due to an Islamist-backed coup.

Several reforms are being introduced by this regime which consists of protest leaders and military generals. A constitution has been adopted for three years of transition. What is noteworthy is the fact that it omits mention of Islam as a defining characteristic of the state.

The state’s official statistics say that the Christian minority is 3% of the total population however Christian representatives say this figure is higher.

Organizations working for protecting human rights worldwide have been criticizing Sudan’s treatment of non-Muslims. Reports say that different sects were driven underground by the previous regime.