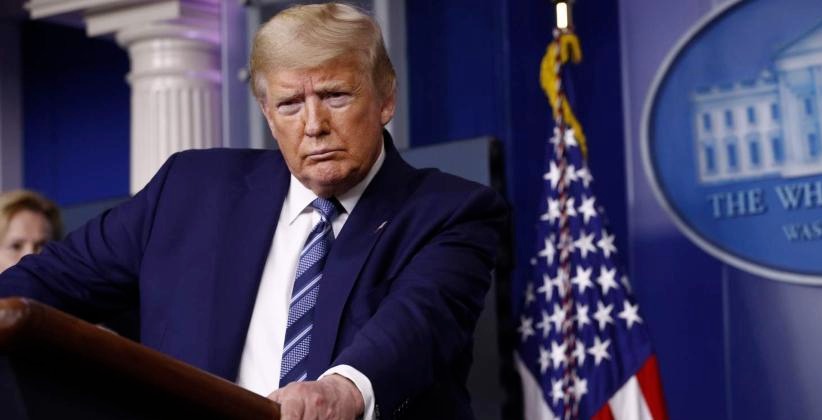 Given cease-and-desist orders, The Rolling Stones are threatening President Donald Trump with legal action for using their songs in his rallies.

In a statement Sunday, 28th June 2020, the Stones said their legal team was negotiating with music rights group BMI to stop using their content in Trump's re-election campaign.

"There is a provision, however, that allows BMI to exclude musical works from the license if a songwriter or publisher objects to its use by a campaign," BMI said. "BMI has received such an objection and sent a letter notifying the Trump campaign that the Rolling Stones' works have been removed from the campaign license, and advising the campaign that any future use of these musical compositions will be in breach of its license agreement with BMI."

“The BMI has notified the Trump campaign on behalf of the Stones that the unauthorized use of their songs will constitute a breach of its licensing agreement,’’ the Stones said. “If Donald Trump disregards the exclusion and persists, then he would face a lawsuit for breaking the embargo and playing music that has not been licensed.’’

During Trump's 2016 campaign, the Stones had protested about using their music to pump up its conservative base at rallies.

The 1969 hit "You Can't Always Get What You Want" from the Rolling Stones became a popular song for his activities. It was again played at the close of Trump's recent rally in Tulsa, Oklahoma — an indoor event criticized for its potential for coronavirus spreading.

Many musicians have also protested about associating their music with Trump's events.

The late rock singer Tom Petty's family said it had released a cease-and-desist order after Trump in Tulsa used the song "I Won't Back Down'."

“Trump was in no way authorized to use this song to further a campaign that leaves too many Americans and common sense behind,'' the statement said. “Both the late Tom Petty and his family firmly stand against racism and discrimination of any kind. Tom Petty would never want a song of his to be used in a campaign of hate. He liked to bring people together.''

Grammy Award-winning singer Neil Young hit out at Trump in 2018 after hearing one of his songs performed during Trump's pre-midterm campaign rallies against his wishes. Despite earlier warnings, the Canadian born singer admonished Trump to use his 1990 single, "Rockin' in the Free World."

"The Rolling Stones have never given permission to the Trump campaign to use their songs and have requested that they cease all use immediately," the British band's publicist, Fran Curtis, told the public at the time.

"It's a funny song for a play-out song -- a drowsy ballad about drugs in Chelsea," Mick Jagger said. "It's kind of weird. He couldn't be persuaded to use something else."

The Famous Band Queen complained when Trump walked on stage to their anthem, We Are The Champions, during a Republican party event in Cleveland, Ohio, in the run-up to the 2016 presidential election.

Pharrell Williams, Rihanna, Aerosmith, Adele, Neil Young, and the estate of late singer Prince have all hit out after the use of their songs by Trump.

Buckley sang the song in the original Broadway production of Cats in the early 1980s.