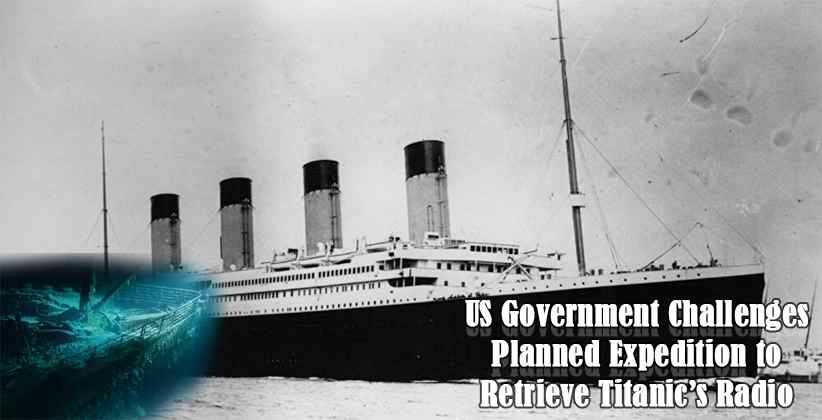 The US Government have challenged a planned expedition to search and retrieve the famous ship Titanic’s wireless telegraph machine. The Government stated that the expedition would breach federal law and its pact with Britain to leave the iconic shipwreck untouched.

The US advocates filed a legal challenge before the federal judge in Norfolk, Virginia on Monday, 8th June 2020.

The expedition is scheduled to occur by the end of August of this year. RMS Titanic Inc., based in Atlanta, plans to recover radio equipment from a deck house near the ship’s grand staircase. The operation may require a submersible to cut into the rapidly deteriorating roof if the vehicle is unable to slip through the skylight. U.S. attorneys argue that the company can't do that.

Their view is that federal law requires the firm to seek approval from the Secretary of Commerce before undertaking study or recovery expeditions that may physically alter or disturb the wreckage. The advocates stated, “The agreement with the United Kingdom regulates entry into the hull to prevent the disturbance of other artifacts and any human remains.”

The international agreement for Titanic calls for the Titanic “to be recognized as ‘a memorial to those men, women, and children who perished and whose remains should be given appropriate respect.’” The Titanic was traveling from England to New York when it struck an iceberg and sank in 1912, killing about 700 of the 2,208 crew and passengers on board. The National Oceanic and Atmospheric Administration represent the public’s interest in the North Atlantic shipwreck site, which is about 400 miles (645 kilometers) inland from Newfoundland, Canada.

The federal Agency of the US had acted as amicus curie (A friend of Court) for years and is now seeking to become a party to the case. NOAA filed its arguments before the same federal judge who ruled last month that the salvage firm could dive almost 4 kilometers (2.5 miles) to recover the Marconi wireless telegraph machine.

The Radio's distress calls to other ships are credited with saving the lives of hundreds of people who have escaped on lifeboats. In the May verdict, U.S. District Judge Rebecca Beach Smith concluded with the salvage company that the telegraph was historically valuable and may eventually vanish inside the increasingly deteriorating wreck. The company plans to display the gear while telling the stories of its heroic operators.

The legal challenge of NOAA escalated a debate that has been simmering for a few years over who controls the salvage missions to the world's most famous shipwreck. The federal agency argues that federal law and international agreements should apply to wrecks. The salvage firm disagrees, arguing that hundreds of years of maritime law put the Titanic’s remains firmly in the custody of the judge. A statement by the company noted, “NOAA seeks to jettison the law of the sea, developed over centuries.” Smith, a maritime jurist who presides over Titanic salvage issues in Norfolk, has acknowledged the unique jurisdiction of the court.

During a hearing in 2017, the judge stated that the court’s salvage jurisdiction over the Titanic was established by the US Supreme Court. But Smith left room for the U.S. government to make its case. In 2017, she said that if NOAA objected to the Titanic Salvage Mission, "they can come to this court to litigate it."