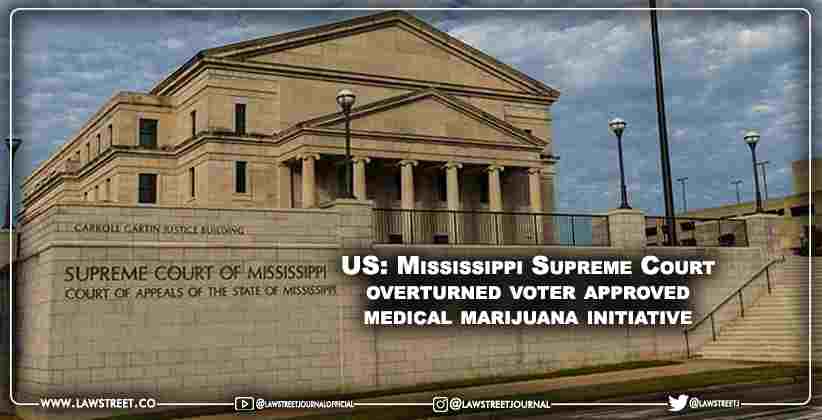 On May 14th 2021, the Mississippi Supreme Court struck down a medical marijuana initiative that was approved by voters in November and the ruling is likely to doom other voter initiatives in the state as well.

The High Court of the state held that the  medical marijuana initiative that was passed with 73% of the votes in November had to be struck down in a 6:3 ruling. This is because of an odd flow in the state constitution’s voter initiative process.

Thus it resulted in arguments from the opponents, that 4-the number of districts, multiplied by 20-the maximum percentage of signatures that may come from any one Congressional District, equals only 80.

Justice Josiah Coleman wrote in the decision that “whether with intent, by oversight, or for some other reason the drafters of the provision wrote a ballot initiative process that cannot work in a world where Mississippi has fewer than five representatives in Congress. To work in today’s reality, it will need amending, something that lies beyond the power of the Supreme Court.”

To this, three of the judges showed conflict and stated that their colleagues effectively did amend the constitution by stepping completely outside of Mississippi law in order to employ an interpretation that not only amends but judicially kills Mississippi’s citizens initiative process.

Justice James Maxwell said that this action not only kills the particular initiative but also the Mississippi’s citizen initiative process.

Organisers had hoped to get other initiatives, including one that would require countries to offer a certain number of days of early voting and another for Medicaid expansion, causes not likely to be championed by politicians in the conservative state, on the ballot in 2022.

Coleman observed that state legislators have been aware of the problem with voting initiative provision under section 273, but have failed to fix it. He also observed that between year 2003 and 2015, at least six attempts were made to amend the section 273 to reflect the new reality of four congressional districts but none of it made out of the committee.

The government of Tate Reeves and many other top officials opposed the initiative 65, the marijuana measure.

Madison Mayor Mary Hawkins Butler filed a suit to block it before the election and she continued to oppose it because it limits a city’s ability to regulate the location of medical marijuana businesses. She also told The Associated Press that she was very content with the court’s decision.

Butler continued saying that “our case was about the constitutional separation of powers and the city is pleased that the Supreme Court followed the plain language of the Mississippi constitution and recognised that unfortunately the current voter initiative process is broken.”