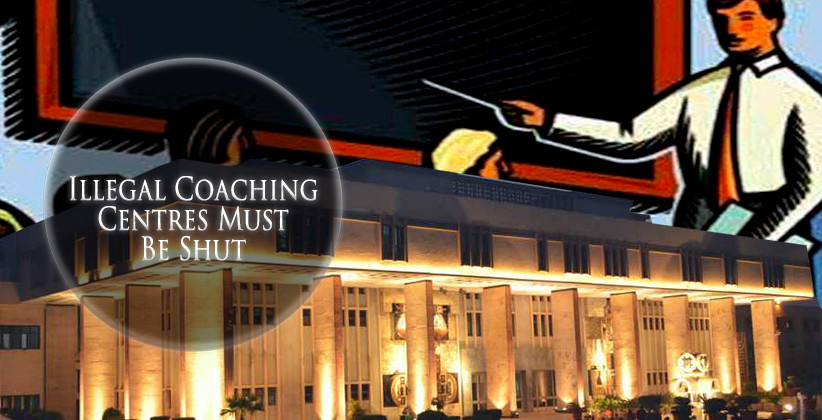 The Delhi High Court on July 29, 2019, directed the civic agencies to immediately crackdown on illegal coaching centres in the city stating that these institutes are “not doing any charity”.

A Bench comprising of Chief Justice D.N. Patel and Justice C. Hari Shankar while hearing a PIL on lack of fire clearances and other violations by the coaching centres said that such coaching centres, which were running in violation of rules and posed a fire-safety risk, must be shut down.

“They are not imparting education; they are more interested in it as a business activity. People running these centres are certainly not poor, but are carrying out a purely business/commercial activity,” the Bench said.

The court rapped the local discom in north Delhi, Tata Power Delhi Distribution Ltd (TPDDL) for not checking centres that are using power beyond permitted load.

“Have you taken any action against any coaching centre in the last five years? You people are so slow. The approach of your officers is — ‘my children are not studying there’. Power companies are also turning a blind eye!” an upset Bench remarked, slamming the discom for providing electricity to coaching centres in Mukherjee Nagar and nearby areas without checking load violations.

It also pulled up the counsel appearing for the discom and highlighted that “all these centres have so many air conditioning units. Any increase in load would lead to sparking or short circuit, resulting in a fire, like it happened in Surat. All coaching centres without permission of municipal corporation or fire clearance, their electricity should be cut forthwith,” the court said.

“Day to day such incidents are happening, when the load is more, there will be a spark. It can only happen either without your permission or your connivance. This is a very serious matter. Why do you need to wait for an order from court (sic)?” the Bench said, ordering the fire department, Tata Power-DDL and the corporations to carry out a fresh survey of coaching and tuition centres under their jurisdiction operating illegally, without fire safety clearance or using more electricity than authorised.

The court directed the authorities to file affidavits indicating the details it had asked for and listed the matter for further hearing on September 18, 2019.

The PIL also raised concerns about the lack of fire-safety measures in schools in the capital. In regard to this, Delhi government’s additional standing counsel Gautam Narayan told the court that there were 5,495 schools in the capital of which 3,008 were under the jurisdiction of Directorate of Education. Of these 3,008, as many as 200 schools were in default of firesafety measures and action, including withdrawal of recognition, is to be taken.

Narayan also told the court that fire department had already conducted an exhaustive inspection of coaching centres on fire safety in May and June and sought two weeks to file an affidavit.