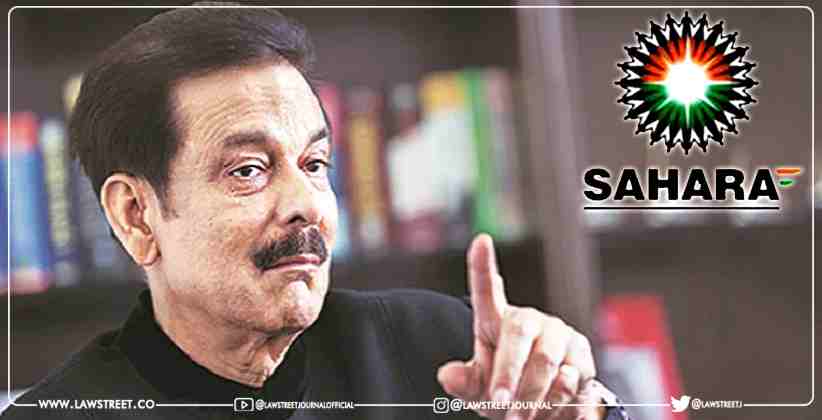 Solicitor General Tushar Mehta brought up the SLP before the bench led by Chief Justice of India NV Ramana.

"One matter filed by us where a lookout circular in the case of Sahara has been stayed." There is some apprehension. It was filed but was not listed. I'll get the details," submitted SG.

SFIO stated in its application for immediate listing that all acts and proceedings taken under Central Government decisions dated October 31, 2018 and October 27, 2020 have been halted, which adversely affects the current investigation and proceedings.

In the SLP, the SFIO requested that the Delhi High Court's December 13, 2021, order be stayed.

Sahara Q Shop Unique Products Range Limited, Sahara Q Gold Mart Limited, and Sahara Housing Investment Corporation Limited were all named targets of an investigation that was ordered on October 31, 2018, based on a report from Mumbai's Revenue Controller General (ROC), which had been issued on August 14, 2018. The Inspectors must submit their investigation reports to the Central Government within three months of the 31st of October 2018 as specified in the directive.

When Sahara India Real Estate Corporation Limited and Aamby Valley Limited appealed the two orders, they went to the Delhi High Court. According to the ruling dated October 31, 2018, counsel for Sahara stated that the investigation report has not been delivered within three months and that the investigation has been ongoing for more than three years.

According to the Companies Act, which stated that SFIO must submit its report within the time period specified in the order, a violation of the statutory mandate was clearly evident by the respondents in continuing the investigation after 31.10.10, when the three-month period had expired, as referred to in Section 212(3) of that Act.

As per counsel, no explanation was given in the order as to why an inquiry into the six companies was deemed required on October 27, 2020.

Counsel cited Section 219 of the Companies Act, 2013, which deals with the power of an inspector to investigate the affairs of related companies, and said that the order dated 27.10.2020 did not disclose on what basis the investigation into the six companies was directed by the Central Government and which of the conditions of Section 219 (a) to 219 (d) were met, relying on that section.

According to a December 13, 2021 order by the Chief Justice and Justice Jyoti Singh division bench, the petitioners had made out a prima facie case for grant of interim relief, and the orders dated October 31, 2018, October 27, 2020, as well as subsequent actions and proceedings initiated pursuant to those orders, including coercive procedures and look-out notifications, had been stayed until January 18, 2022. The High Court had stated on January 18, 2022, that the interim order of December 13, 2021, would continue while the writ case was pending.

According to the bench, it was not necessary to uphold the contested orders because:

"However, the investigation was not completed within the stipulated time and, as asserted by the petitioners, the same is still ongoing." "Prima facie, there is a violation of Section 212(3) and the direction of the Central Government."

"There seems to be prima facie merit in the contention of the petitioners that the companies sought to be investigated under Section 219 ought to have an affiliation with the company(s) under investigation, as provided for in the Statute. Petitioners have categorically averred in para 26 of the writ petition that the six companies listed in the order dated 27.10.2020 are neither the subsidiary nor the holding companies and were never managed by the Managing Director of the earlier three companies under investigation, pursuant to the order dated 31.10.2018. Respondents, on a pointed query, were unable to rebut the said position. Therefore, in our prima facie view, there was no justification for initiating investigation against Petitioners No.2 and 3 vide the impugned order dated 27.10.2020. "

"There is also prima facie merit in the contention of the petitioners that the impugned orders dated 31.10.2018 and 27.10.2020 do not indicate the reasons or circumstances that compelled the Central Government to form an opinion to order an investigation by the SFIO into the affairs of the petitioners. All that the orders reveal is that the Central Government has the power under Section 212 of the Companies Act to direct an investigation into the affairs of a company and that it has formed an opinion to do so. Reading of Section 212(1) leaves no doubt that the Central Government is required to look into the facts and circumstances that emanate out of a report of the Registrar or Inspection furnished under Section 208 of the Companies Act, 2013 and then form a subjective opinion based on objective considerations. In our prima facie view, nothing is discernible from the impugned orders as to what cogent material led to the formation of the opinion by the Central Government that the affairs of the petitioners were required to be investigated."

Notably, the Supreme Court on Friday halted the Patna High Court's requirement that the Bihar DGP produce Sahara India Group CEO Subrata Roy on May 16 by staying that requirement as well.