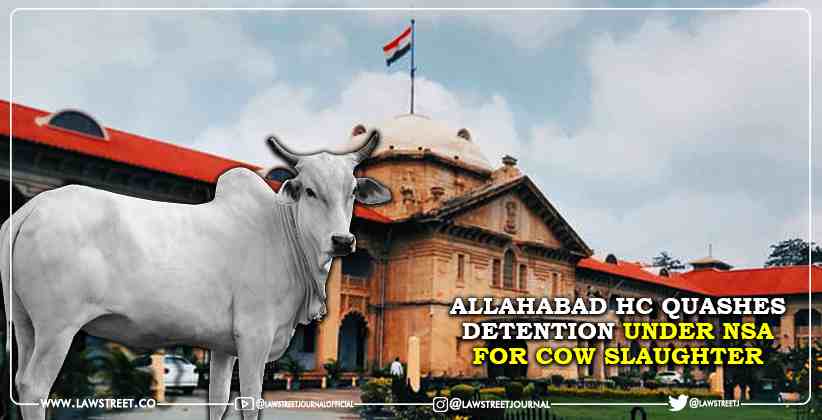 Petitions were moved against the detention of Pervez, Irfan and Rahmatullah, who were arrested last year on the charge of cow slaughter. Later, the authorities slapped against them the stringent National Security Act (NSA), 1980, which allows preventive detention for up to 12 months without a charge if the authorities are satisfied that the person is a threat to national security or law and order.

Allahabad High Court has now quashed the detention of the men under the stringent National Security Act (NSA) for cow slaughter, saying the issue may be a matter of law and order but not public order.

Hearing habeas corpus petitions, the Lucknow Bench of the HC said the accused were detained for a solitary case with no evidence to show that they will commit the crime again on being released.

The Court while quashing their detention observed that the act of slaughtering a cow in the secrecy of one’s own house in the wee hours probably because of poverty or lack of employment or hunger would ‘perhaps only involve a law-and-order issue.’

The Bench of Justices Ramesh Sinha and Saroj Yadav during the hearing observed, “It could not be said to stand on the same footing as a situation where a number of cattle have been slaughtered outside in public view.”

The High Court in a statement said, “The act of the petitioners can at best be described as a matter affecting law and order and not public order. Moreover, there was no material for reaching the conclusion for detaining authorities that the petitioners would repeat the activity in future.”

The Sitapur police had booked the three men under the Uttar Pradesh Cow Slaughter Act, 1955 on July 12, the previous year after they raided the house of Rahmatullah and found five people cutting the lump of beef in small pieces. Irfan and Pervez were arrested on spot. The two revealed the name of Rahmatullah and two other co-accused. Later, the NSA and Gangster Act, 1986 were slapped against them.