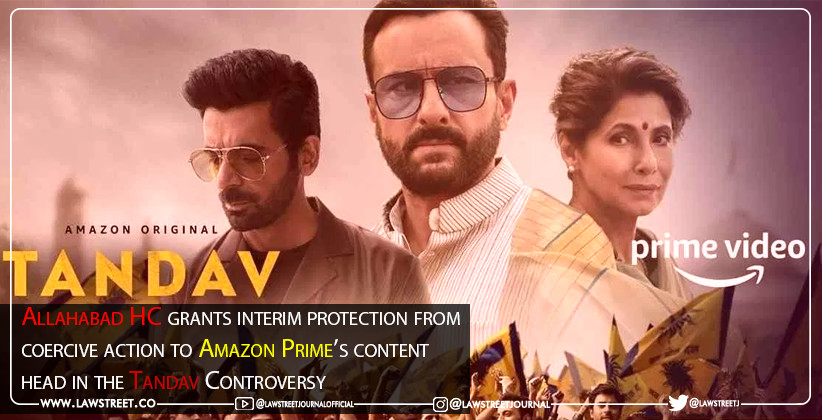 The anticipatory bail plea is related to an FIR filed against the applicant in Gautam Budh Nagar in Uttar Pradesh under sections 153-A (1) (B), 295-A, 505 (1) (B), 505 (2) of IPC which involves charges of promoting enmity between different groups, insult to religion, statement conducive to public mischief etc.

Another FIR was also registered against the applicant along with ‘Tandav’ web-series Director Ali Abbs Jafar, producer Himanshu Mehra, Writer Gaurav Solanki and others at Hazratganj Kotwali in Lucknow for negative depiction of Hindu Gods in the series in January 2021.

The persons including the applicant named as accused in the former FIR approached the Bombay High Court in January 2021 seeking clubbing of multiple FIR and also quashing the proceedings seeing it as a violation of rights under Article 19(1)(a) of the constitution. By this time multiple FIRs had been registered concerning the contents of the web-series in different parts of the country. In the High Court, the petitioners pleaded by placing reliance on the judgement in TT Antony v. State of Kerala & Ors. which said that there cannot be multiple FIRs on the same ‘substratum of allegations’.  Significantly during the proceeding in the Bombay High Court, the court observed that ‘You Cannot Hurt Religious Sentiments’. Though the High Court refused to provide interim protection from arrest for the petitioners it granted anticipatory transit bail.

The transit bail allowed the applicant to approach the Allahabad High Court seeking anticipatory bail in the proceeding instituted in Uttar Pradesh.

In a related incident, the Ministry of Information and Broadcasting has sought an explanation from Amazon Prime Video on the issue, Tandav is a web series starring Saif Ali Khan, Dimple Kapadia, Sunil Grover, Tigmanshu Dhulia, Dino Morea, Kumud Mishra, Mohd Zeeshan Ayyub, Gauhar Khan and Kritika Kamra that was premiered on Amazon prime video last month. The Allahabad High Court in its order has stayed all coercive action against Aparna Purohit till the final order on the anticipatory bail application is pronounced.   [READ ORDER]