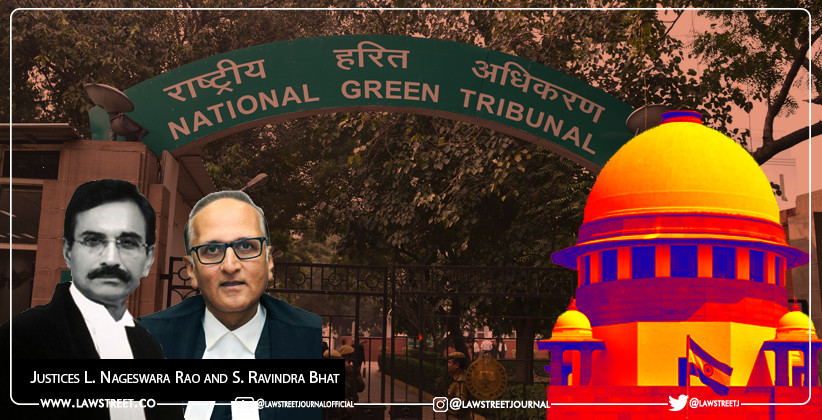 Judiciary Mar 04, 2021 Aditi Aggarwal ( Editor: Ekta Joshi ) 4 Shares
4 Shares
The Supreme Court in a case titled ‘Sridevi Datla v. Union Of India’ set aside an order of National Green  on Monday which dismissed an appeal filed against the grant of environmental clearance for construction of the Greenfield International Airport, Bhogapuram, Vishakapatnam.

The NGT, to dismiss the appeal filed by Sridevi Datla, had refused to condone the delay. The delay was sought to be condoned on the ground that the clearance and related documents were voluminous and the matter required some technical expertise, requiring the papers to be forwarded to experts and lawyers in Delhi, and the inter se communication delay. QUESTION BEFORE THE COURT:

The question before the Apex Court bench comprising Justices L. Nageswara Rao and S. Ravindra Bhat was whether the approach to the issue of limitation by the NGT was correct, and whether on a correct interpretation of law, the appeal under Section 16 was filed within the 90 days period, in the facts of the case.

"There can be no dispute that the period of limitation set out in a special law, which provides for remedies and appeals, has to be construed in its terms and without reference to the Limitation Act, if it contains specific provisions delineating the time or period within which applications or appeal can be preferred, and confines the consideration of applications for condoning the delay to a specific number of days,” the court said.

Section 10 of the General Clauses Act, 1897 Applicable The court then proceeded to consider the contention that the appeal is to be considered as having been filed within the extended period of 60 days, since the last (of the 60 days) was a Sunday (12.07.2020). It noticed that Section 10 of the GeneralClauses Act, 1897 stipulates that when the last date for doing something falls on a public holiday, the act “shall be considered as done.. “if it is done or taken on the next day afterwards on which the Court or office is open.”

“This provision applies to all Central Acts enacted after the said Act was brought into force...It is also noticeable that there is no indication in the NGT Act that Section 10 of the General Clauses Act cannot be applied. It is therefore, held that the provision applies proprio vigore to all appeals filed under the NGT Act,” the court said.

“It is evident that the term sufficient cause is relative, fact dependent, and has many hues, largely deriving colour from the facts of each case, and the behaviour of the litigant who seeks condonation of delay (in approaching the court). However, what can broadly be said to be universally accepted is that in principle, the applicant must display bona fides, should not have been negligent, and the delay occasioned should not be such that condoning it would seriously prejudice the other party.”


Allowing the appeal, the bench said that the NGT erred in observing that no sufficient cause was shown by the appellant. It said:

“This court is of the opinion that there is merit in the appellant's argument. The respondents, especially, the project applicant, had urged that the appellant is an interested party, and cannot be called a public-spirited citizen, because she had opposed acquisition of land for the airport and therefore, was able to access legal advice at the High Court stage. There is, in our opinion, nothing in the NGT Act which excludes parties who would be directly affected by a project, that has environmental repercussions, from accessing the tribunal (NGT). Likewise, characterizing the nature of legal advice that can be accessed for challenging land acquisition, as similar to a challenge to environmental clearance which involves application of mind to technical issues in a detailed manner, would be unfair and simplistic. Scientific or technical support – apart from expert professional legal advice is necessary, if the NGT were to be approached. In these circumstances, this court is of the opinion that given the mandate of the NGT Act, the exercise of discretion, as was done in this case, to reject the appeal by dismissing the application for condonation of delay, on the ground that no sufficient cause was shown, was erroneous and based on a narrow reading of the law. An appeal to the NGT in such matters is no ordinary matter; it has the potential of irrevocably changing the environment with the possibility of likely injury. Application of judicial mind by an independent tribunal in such cases, at the first appellate stage, is almost a necessity.”