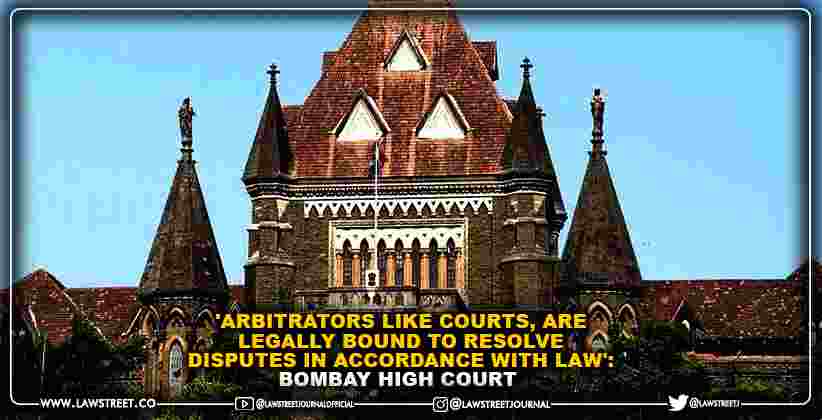 In a remarkable judgment, the Bombay High Court has held that Arbitral Tribunals like Courts are legally bound to resolve disputes in accordance with the public policy of the law.

The Court observed that Arbitral Tribunals do not lack the inherent jurisdiction in considering a claim for specific performance of the MOUs. They have the jurisdiction to entertain, try, and adjudicate upon such claims arising out of not in action in rem.

The respondent, a construction company, had entered into sale agreements to form a society within the timeline as prescribed in the Maharashtra Ownership Flats (Regulations of the Promotion of Construction, Sale Management, and Transfer) Rules, 1964 [MOFA Rules]. The respondent also covenanted that they would execute a conveyance deed within four months of registration of the society.

When the respondent failed to execute a Deed of Conveyance even after 8 years despite taking full consideration from the flat purchasers, the petitioner filed an application before the Competent Authority under Section 11 of the Maharashtra Ownership Flats Act, 1963 for a unilateral Deemed Conveyance. The dispute was then referred to Arbitration under the Arbitration clause forming part of the Agreement entered between the parties.

Senior Advocate Dr. Veerendra Tulzapurkar appearing on behalf of the petitioner pointed that the Competent Authority had already decided the title in respect of the said property in favor of the petitioner.

He submitted that since the Competent Authority had already passed a quasi-judicial order granting deemed conveyance in favor of the petitioner society and has also issued a conveyance certificate, the Arbitral Tribunal cannot examine the validity or nullity of a quasi-judicial order passed under a statute. Such claim for specific performance, if any, can only be maintained before the Courts and not before the Arbitral Forum.

He further contended that a quasi-judicial authority would operate in rem and thus no arbitral proceedings as filed by the respondent were maintainable before the Arbitral Tribunal.

“The Arbitral Tribunal has assumed jurisdiction on a perverse finding that the MOFA does not confer any adjudicatory function of the Competent Authority. Since the Arbitral Tribunal has committed a fundamental and patent error in the impugned order, this writ petition filed by the petitioner under Article 226 read with Article 227 of the Constitution of India is thus maintainable. It is submitted that it was a case of lack of inherent jurisdiction of the Arbitral Tribunal in deciding a right in rem. This Court has thus ample power in such case to exercise powers under Article 226 or 227 of the Constitution of India1@@@”, Dr. Tulzapurkar submitted.

Advocate Sanjay Jain appearing for the respondent, on the other pointed out that the respondent has not challenged the impugned order passed by the Competent Authority but had prayed for a declaration that the agreement entered between the parties is valid, subsisting, and binding and prayed for specific performance of the said agreement.

The Court held that the Arbitral Tribunal has jurisdiction to decide all the claims which can be decided by a Civil Court unless the same is specifically barred either expressly or by necessary implication.

The Court further held that the order passed by the Competent Authority did not create a title in respect of such property conclusively in favor of the society (petitioner). Such an order of Deemed Conveyance is subject to the final adjudication of title in the appropriate Civil proceeding before a Civil Court or an Arbitral Tribunal.

The Bench while dismissing the writ petition observed that the petition is a gross abuse of the process of law and has been filed with a view of delaying the outcome of the arbitral proceedings.