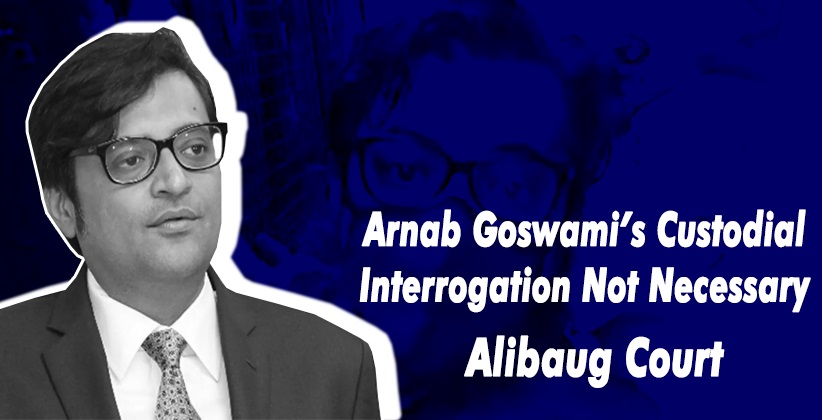 Mr. Goswami was arrested from his residence in Mumbai for allegedly encouraging the suicide of interior designer Anvay Naik and his mother, Concorde Designs Private Limited director Kumud Naik, for not paying 83 lakhs to the Bombay Dyeing Studio Project.  The prosecution argued in court that Mr. Goswami had attempted to evade arrest and had not cooperated. The prosecutor said custody was required for some documents seized from him to be questioned.

Senior advocate Aabad Ponda, representing Mr. Goswami, appeared through videoconferencing and told the Chief Judicial Magistrate (CJM) that no summons or notice was issued and after a summary report was submitted, arresting his client was illegal as Mr. Goswami was willing to pay the money. CJM Sunaina Pingle said the death of the victim was not clearly linked to the accused after perusing the documents and hearing the arguments for over five hours. For such an investigation, no court order was issued. In the earlier investigation, the prosecution had not demonstrated or reported the defect, so police custody could not be granted, the court said. “The investigating officer on October 15, 2020, only submitted a report to the magistrate informing that certain fresh material has come to the fore in the case. There is no record to show that the magistrate permitted reopening of the case,” the order said. The 11-page-order also states, “All reasons seeking custody are primarily a collection of documentary evidence hence custody of the accused is not necessary”.

Legal Insiders Dec 03, 2020 Samit Siddhanta ( Editor: Ekta Joshi ) 4 Shares
4 Shares
After a request made by a law student, Aditya Kashyap, the Attorney General of India granted consent to initiate contempt of court proceedings against Stand-up comedian/comic illustrator Rachita Taneja for her tweets on the bail granted to Republic TV editor-in-chief Arnab Goswami.Out of the two tweets for which contempt proceedings were demanded, A.K. Venugopal said that the first was “gross insinuation of the Apex Court of this country” and on the second one he said, “The tweet is...
Read full post