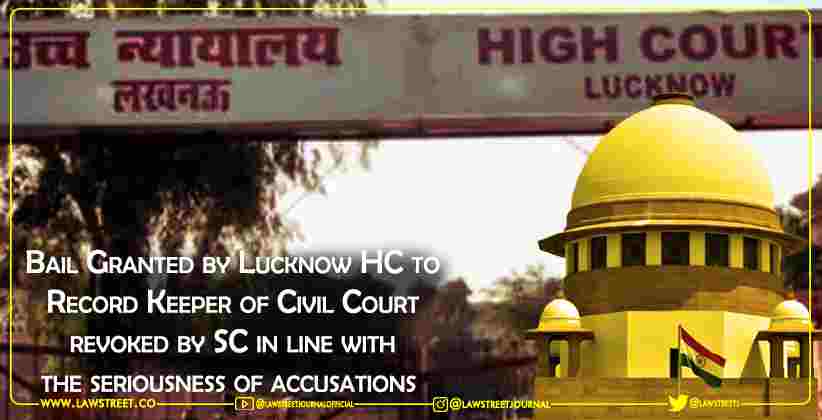 Bail granted by High Court of Judicature at Allahabad, Lucknow Bench, to the Record Keeper of the Civil Court, Unnao was cancelled by Hon'ble Supreme Court who tampered the court record and instead of 'Mahesh', 'Ramesh' had been written in the pending case of State vs. Mahesh, under Section 307, 504 and 506 IPC.

The Court observed that if it considers the impugned judgment and order passed by the High Court, it appears that High Court has not adverted itself to the seriousness of the case and the offences alleged against Respondent no.2 - accused and the gravity of the matter.

It also appears that the High Court had released Respondent No.2 - accused on bail in a routine and casual manner and without adverting to the seriousness of the offence and the gravity of the matter relating to forgery and/or manipulating the court order.

The High Court has only observed that since the innocence and complicity of the accused can be decided only after taking evidence with regard thereto, without commenting anything on merit as to the complicity, involvement and severeness of the offences, the case being triable by the Magistrate and the charge sheet having been filed and the accused is languishing in jail since 22.11.2018, is entitled to be released on bail.

Therefore, the High Court ought to have been more cautious/serious in granting the bail to a person who is alleged to have forged/manipulated the court record and taken the benefit of such manipulated and forged court record more particularly when he has been charge-sheeted having found prima facie case and the charge has been framed. Suffice it to say that in the facts and circumstances of the case and looking to the very serious allegations of forging/manipulating court order and having taken advantage of the same, the High Court is not justified in releasing Respondent No. 2 on bail. Merely because the charge-sheet is filed is no ground to release the accused on bail. The submission on behalf of the accused that as the record is now in the court's custody there is no chance of tampering is concerned, the allegation against the respondent accused are of tampering/forging/manipulating the court record which was in the custody of the court. Seriousness of the offence is one of the relevant considerations while considering the grant of bail, which has not been considered at all by the High Court while releasing Respondent No. 2 - accused on bail.

"Now, so far as the submission on behalf of the respondent -accused that the appellant has no locus to file the present application for cancellation of the bail is concerned, it is required to be noted that in fact, it was the appellant who approached the High Court alleging tampering of court record by the Respondent No. 2 - accused and thereafter, the High Court directed the Learned Additional Sessions Judge to submit his comments and thereafter the Learned Additional Sessions Judge submitted its enquiry report and thereafter, the FIR has been lodged," the Supreme Court held.

"Therefore, it cannot be said that the appellant has no locus to file the present application for cancellation of the bail. Even otherwise in a case like this, where the allegations are of tampering with the court order and for whatever reason the State has not filed the bail application the locus is not that much important and it is insignificant, " it further held.

It was made clear that any observations made by this Court in the present order be treated to have been confined to the grant of bail and the trial to be proceeded further and conducted in accordance with law and on its own merits.