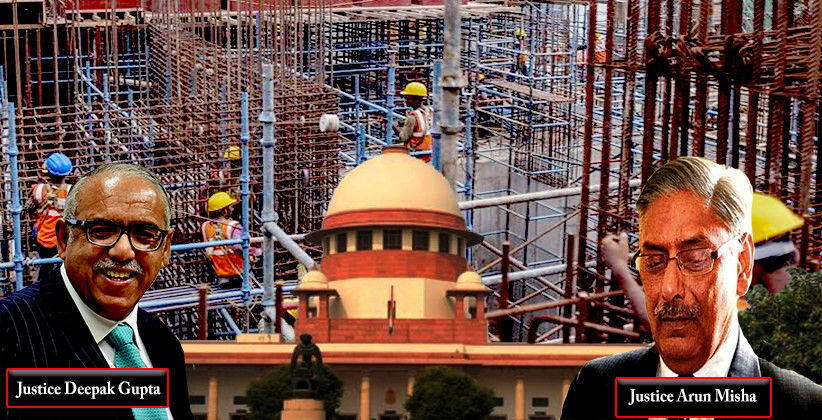 The Supreme Court in the latest development in the case of M.C. Mehta v. Union of India Writ Petition (Civil) No. 13029 of 1985 lifted the ban on on-going construction work in Delhi NCR on December 9, 2019. The Apex Court had imposed this ban earlier to curb air pollution in the city.

A Division Bench comprising of Justices Arun Misha and Deepak Gupta was hearing a matter that it had taken suo moto cognizance of, in the light of increasing levels of air and water pollution in the city. The Apex Court clarified that construction works would be allowed to be undertaken between 6 am to 6 pm every day.

The Court was informed by the Assistant Solicitor General Atmaram Nadkarni that the previous order of the court to form a high-level committee in order to look into the problem of hazardous air pollution had been complied with. The committee examined whether it would feasible to install anti-smog towers in the city and the costs for doing so.

In this regard the court had held in its previous hearing that, “With respect to Smog Towers, let a concrete decision be taken within 10 days from today what kind of towers are required which may operate successfully and how many such towers are required so as to take care of the pollution which is being caused in Delhi and NCR region. The decision be taken not only by the Government of Delhi, but also by the States of Punjab, Haryana and Uttar Pradesh, where the position is reported to have deteriorated.”

The effectiveness of using “Anti-Smog Guns” that spray water upto 50 metres to bring down suspended pollutants in the air was questioned and the Government of Delhi along with the Central Pollution Control Board or CPCB had been asked to produce a report in the matter within 10 days, on November 25, 2019.

The matter has been listed for the next hearing on December 16, 2019.