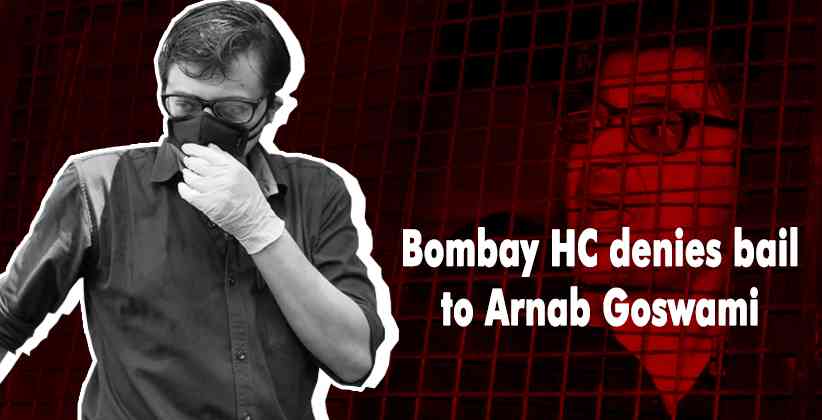 The Bombay High Court in a special hearing on Saturday (November 7, 2020) through video-conferencing reserved final orders on the bail plea by Republic TV Editor-in-chief Arnab Goswami in an abetment to suicide case registered against him in May 2018.

Arnab Goswami has filed the interim bail application under Section 439 of the Criminal Procedure Code (CrPC) 1973, which provides special powers to the high court or sessions court for grant of bail.

The court which has been hearing the plea for interim relief for three days said that it will pass the order “earliest possible”.

The court also said the accused are at liberty to file for bail and directed that it be heard and disposed of within four days.

The Bench of Justices S S Shinde and M S Karnik was hearing habeas corpus petition for “immediate release” and a stay on the investigation along with pleas by two other accused Nitish Sarda and Feroz Shaikh.

The case against Goswami pertains to the death of interior designer Anvay Naik and his mother Kumud Naik at their bungalow in Alibaug in May 2018.

According to police officials, the duo died by suicide over alleged non-payment of dues by Arnab Goswami’s television channel and two other companies.

The writ plea filed by Arnab Goswami said the arrest was conducted in “blatant violation of the fundamental rights to life and personal liberty” and his dignity guaranteed under Article 21 of the Constitution of India.

In his bail application, Goswami made allegations of manhandling by the police.

Senior advocates Harish Salve and Aabad Ponda are the counsel for Arnab Goswami, sought his interim release arguing that his arrest was “completely illegal’.

After hearing all the arguments put forward by the counsel the bench said, “Don’t you think that with the other remedies available, if we grant relief, then everyone will come to the high court? The current danger is that the High Court is already over flooded with petitions or applications for regular bail. At the same time, it will send a wrong signal that though Section 439 is there (also provides remedy before Sessions Court for bail), then why come under the writ jurisdiction (of HC)? It will also undermine the authority of lower (trial) courts. You have remedies available.”

Opposing the petition senior counsel Amit Desai, representing the state government, said the petitioners should follow procedures of CrPC and seek remedy available to them before the trial courts.

The High court issued a notice on its website stating that it will pronounce order on Arnab Goswami’s interim bail plea on Monday, November 9, 2020, at 3 pm.