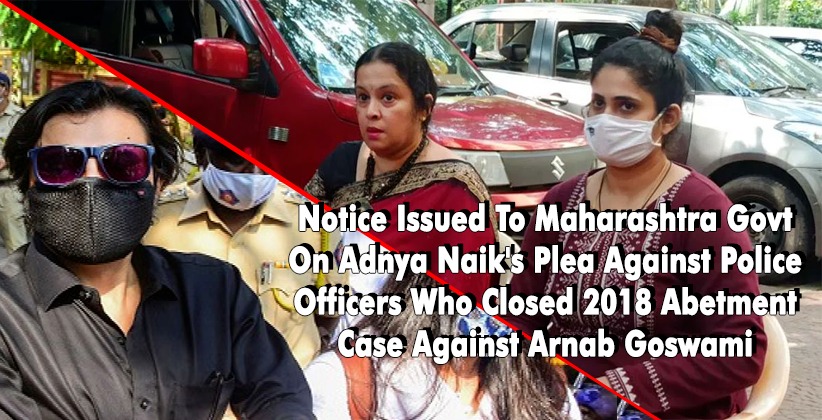 Today (7th October, 2020), the Bombay High Court issued a notice on a petition by Adnya Naik. The petition soughtinquiry against those police officers who filed closure report in the 2018 abetment to suicide case against Republic TV Chief, Arnab Goswami.

A division bench (consisting of two judges) was formed: Justice SS Shinde and Justice MS Karnik. They issued a notice to the Governemnt of Maharashtra during a special sitting held todayto hear Goswami’s habeas plea.

Suicide note written in English was written by Anvay Naik. The note stated thathe and his mother decided to take the extreme step on account of payments due to them not being cleared by the owners of three companies- television journalist Arnab Goswami of Republic TV, Feroz Shaikha of IcastX/Skimedia and NiteishSarda of Smartworks.

He also stated that interiorworks for republic TV was done by his firm and an amount of Rs.83 lakh was due from Goswami and ARG Outliner Pvt. Ltd. which is the parent company of Republic TV.

This case was closed in April 2019 by the Raigad Policesaying that they did not find any evidence against the accused named in suicide note, including Goswami. However, in May 2020, Adnya Naik asked Anil Deshmukh who is the Home Minister of Maharashtra to reopen the case.

She claimed that that the police had “miserably failed” to investigate the case and had filed a closure report. She also said that the closure report was accepted by the Magistrate without serving notice upon her.

The Bench had earlier told the co-accused in the case, who were disputing reopening of the case without Magistrate’s permission, that “Magistrate was legally obliged to serve notice on informant to give opportunity for protest complaint.”

Advocate Subodh Desai was appearing for the complainant and he informed that it was only in the month of April that Goswami’s company tweeted about closing of the matter, that they found out about the Magistrate’s order.