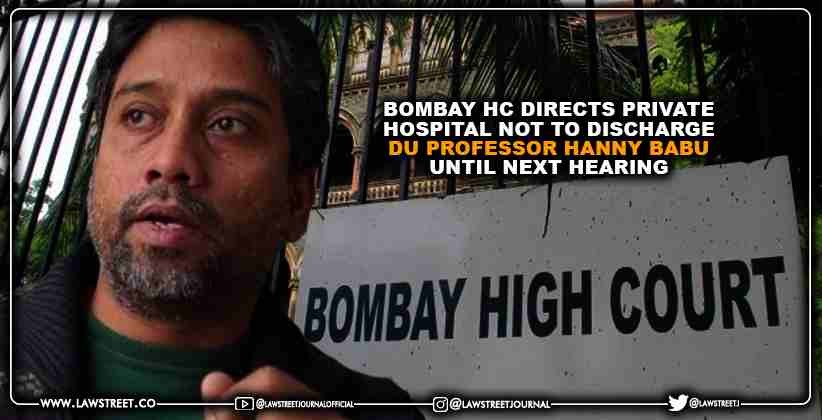 The Bombay High Court on Thursday (28/05/2021) directed a private hospital not to discharge Delhi University Professor Hanny Babu until the next hearing of a petition submitted by his wife (Jenny Roweena v. The State of Maharashtra).

The direction was issued after the court heard the petition by Babu's wife, which prayed that the Professor's health condition is not adequate to return him to jail and sought interim emergency bail.

Babu had tested positive for Covid-19 earlier in May 2021 and was also suffering from a severe eye infection. He was admitted at a government hospital initially and was later shifted to a Breach Candy Hospital after a court order allowing for the same. The transfer order also came when family members of the incarcerated Professor petitioned before the High Court.

Allowing the transfer of the Professor to the private hospital, Justice Kathawalla observed that:

“Let the family get psychological satisfaction at least that he is treated in a hospital of their choice. There is nothing wrong if this becomes a precedent, especially in the present times.”

Professor Hanny Babu is one of the accused in the Bhima Koregaon- Elgaar Parishad Case.

The present matter was heard by a vacation bench comprising Justices S.S. Shinde and N.R. Borkar.

Advocate Santosh Patil appearing for the National Investigation Agency, submitted that most of the petitioner's prayers had been granted in previous hearings. He also asked for more time to reply to the question of emergency bail.

The court, in its order, directed that:

The matter is posted for the next hearing on 1st June 2021.