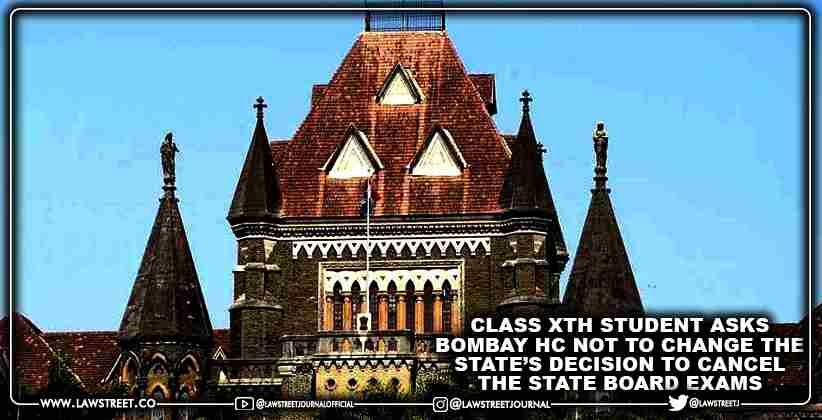 A class Xth student has filed an intervention application in the Bombay High Court asking not to alter the state governments decision to cancel the Xth standard board exam.

The intervention is sought in a public interest petition filed before the court challenging the state governments decision to cancel the SSC exams, which was to happen in March 2021.

The application states that:

"This year has to be considered as an exceptional year because of the pandemic situation. While education is important, it cannot be more important than the lives of the children, teachers, other staff and parents of the children who will venture out to appear for the exam."

The application argues that the public interest petition is filed by a 61-year-old adult without considering the emotions of the children who are to attempt the exam. The application submits that students are under a lot of stress mentally and emotionally due to the uncertainties and their views are to be given prime importance.

The application was filed through Advocates Asim Sarode and Ajinkya Udane. The application seeks direction from the court to the State Education Board to formulate a method of evaluating the students without conducting exams and submit it before the court within seven days.

It was submitted that conducting the exam during the pandemic will put the children and their parents at risk of infections, given that newer strains of the virus are being discovered, and children are at a higher risk of infection.

The application also submitted that students would find it challenging to get into the exam mode as they were under the impression that the exams are cancelled.

It is also pointed out that students from rural and remote areas will find it very difficult to prepare for the exams as they lack access to online classes.

Also, unlike the XIIth standard exam, Xth standard exam does not play much role in choosing a career and can be cancelled without much difficulty, the petition said.

The application made it clear that the prayer is not because the students are unwilling to study for the exam, but it concerns the health of 16 lakh students and 32 lakh parents forced to venture out.

In a previous hearing of the petition, the court has criticised the Maharashtra government for compromising the students' future in the fight against the pandemic.