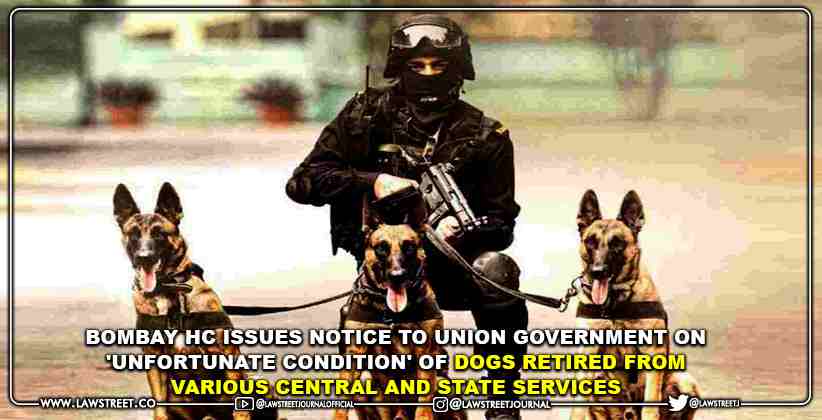 The Bombay High Court issued notice to the Central Government last week after hearing two civil applications filed in the suo moto court proceedings initiated in 2016 in response to the plight of a dog named "Reno," a labrador who worked in the Railway Protection force.

With the filing of two applications, the Court's and society's attention was drawn to the unfortunate situation of some of the dogs who have retired from various Central and State services after having rendered meritorious service.

As an example, the applications cited the case of a dog named 'Lucky.'

Advocate SS Sanyal, the Amicus Curiae in the case, contended that, despite the Defence Ministry's response that there is a policy in place to care for and look after old and worn out dogs, the policy was not being implemented on the ground.

The amicus also mentioned the case of 'Lucky,' who was allegedly discovered in poor health sitting on the corner of a street in the City of Saoner. As a result, appropriate directions were sought via these applications.

In light of this, the Bench of Justices Sunil B. Shukre and Anil S. Kilor issued a notice to the respondents for final disposition at the admission stage, with a four-week return period.

Importantly, the Court directed in 2018 that if animals such as dogs, horses, and so on are left unattended after retirement, the concerned department should be allowed to devise an ad hoc policy to ensure the animals' well­being.

The ASG representing the Union of India also stated that a detailed proposal to eliminate euthanasia of old and worn out army animals and to provide them with appropriate rehabilitation during their lifetime was being actively considered.

Case Title: Court on it's own motion v. Union of India and others.