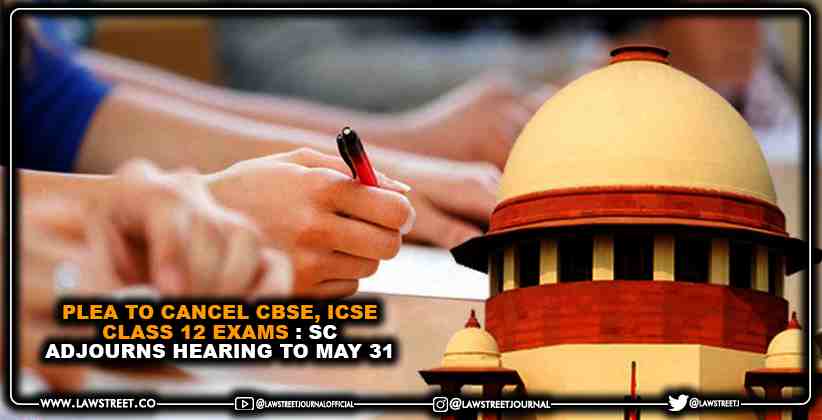 The Supreme Court on Friday (May 28, 2021) postponed until May 31 a petition seeking the cancellation of CBSE and ICSE Class XII examinations and the development of an objective system for declaring class XII results within a fixed timeframe.

During the brief hearing, Justice Dinesh Maheshwari stated that the CBSE is expected to make a decision on the subject on June 1.

Advocate Mamta Sharma further asked the court to take suo moto action on the concerns surrounding state board exams and to notify all state boards. "Please have a positive attitude. By Monday, there could be some sort of conclusion ", the judge informed the lawyer.

The Centre, the Central Board of Secondary Education, and the Council for the Indian School Certificate Examination have been asked for guidance.

The petition also asks the court to set aside the CBSE and Council for the Indian School Certificate Examination's Notifications dated 14th, 16th, and 19th April 2021, save for paragraphs dealing with the delay of Class XII examinations.

In the case of Amit Bathla & Anr. V. CBSE & Ors. (2020), the petitioner Advocate Mamta Sharma requested similar directives to those given by the Supreme Court in the case of Covid - 19 in India to face the suffering of innocent school students in CBSE and ICSE Class XII.

The Supreme Court, in that judgement, ordered the computation and declaration of class XII students' results based on their previous grade because their main final test had been postponed and could not be held owing to the exceptional circumstance produced by the pandemic.

CICSE/ CBSE has previously acknowledged and admitted the same grave circumstance of covid 19 through circulars dated 26th June and 13th July 2020, and had partly recognised the verdict of the Supreme Court pronounced last year in respect of class X pupils for the current academic session of 2020-2021 by:

Notifying them that they would not be conducting a new final test. Using the criteria of announcing a result based on their previous internal grade

However, according to the plea, "step motherly arbitrary, cruel directive" was issued to innocent pupils in class XII to postpone their final exams for an undetermined period instead of implementing the guidelines propounded and approved by them last year.

According to the petitioner, the respondents cannot be expected to stay silent in the face of the current circumstance and to fail to make a timely decision on the test and announcement of results for more than 121 lakh students in class XII.

The petitioner, who is registered as an advocate with the Delhi Bar Council, claims she was approached by minor students in Class XII and is filing the petition on their behalf because their claim is genuine and to protect their fundamental rights to education under Article 14 and 21 of the Indian Constitution.

The plea argues that due to the unprecedented health emergency in the country and the rising number of Covid -19 cases, conducting examinations, either offline/online/blended, in the coming weeks is not possible, and that any delay in examinations will result in irreparable loss to students, as time is of the essence in applying for higher education courses at foreign universities.