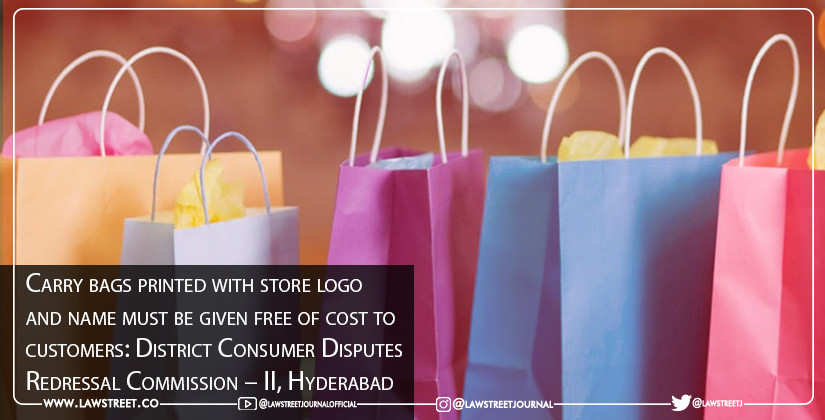 Judiciary Feb 23, 2021 Mathews Savio ( Editor: Ekta Joshi ) 5 Shares
5 Shares
In deciding a complaint filed by a 21 years old student, Baglekar Akash Kumar, the District Consumer Disputes Redressal Commission – II, Hyderabad ordered the opponent supermarket to provide the carry bags which contain the store name and logo free of cost to all customer.The complainant made a purchase at the store of the opposing-party in June 2019, the bill amount charged by the store included Rs. 3 for the plastic carry bags provided. The bag had the name and logo of the supermarket.

The complainant, as party-in-person, argued that charging a price for the carry bags on which the store’s name and logo are printed amounts to using the customers as advertisement agents at the cost of the consumer himself. Such a practice was argued to amount to an Unfair-trade practice under Section -2 (1) (r) of the Consumer Protection Act, 1986.

A similar case decided by the Chandigarh Consumer Court where Bata company was asked not to use its customers as advertisement agents were quoted by the complainant to support his argument. The opposing-party, the supermarket, on its part argued that the complainant had a choice to buy or not to buy the carry bag and was in no way forced by the store. Further, it was argued that the store was facilitating the consumer by providing them with quality plastic carry bags meeting the necessary standards in compliance with the Plastic Waste Management Rules, 2011 as amended in 2018. There was no restriction imposed on the consumer from bringing his carry bag.

The counsel arguing for the Super-market contented that the demand for payment for providing plastic bags is a mandate on the store under the Plastic Management Waste Management (Amendment) Rules, 2018. The practice embodies the 'polluter-pays' principle by making the customer pay if he is not taking the responsibility of bringing reusable bags. It aims to discourage the indiscriminate use of plastic bags. The store in its part is actively encouraging the customers to carry with them reusable bags by prominently displaying signs in the store to that effect.

The complainant was argued to be attempting to harassing the opposite party by bringing false claims of material loss, damage, mental agony and physical hardship.  The District Consumer Disputes Redressal Commission after hearing both sides held that the practice of charging the customers at the cash counter for the carry bags without display of its price and specification affects the consumer’s right to make an informed choice. The Commission also held that charging the customers for the carry bags containing store logo and name amounts to unfair trade practice as the customer is used as a tool for advertising without his consent and at his own expense. The Commission in its order directed the store to give free carry bags to all customers if printed with the store logo and name. Also, to pay back the Rs. 3 charged from the complainant along with Rs. 15,000 as compensation for being used as an advertising tool and Rs. 1500 as cost of the proceeding. The Commission in its order also made it clear that stores can charge for the plastic carry bags if it does not contain the store name and logo.    [READ ORDER]