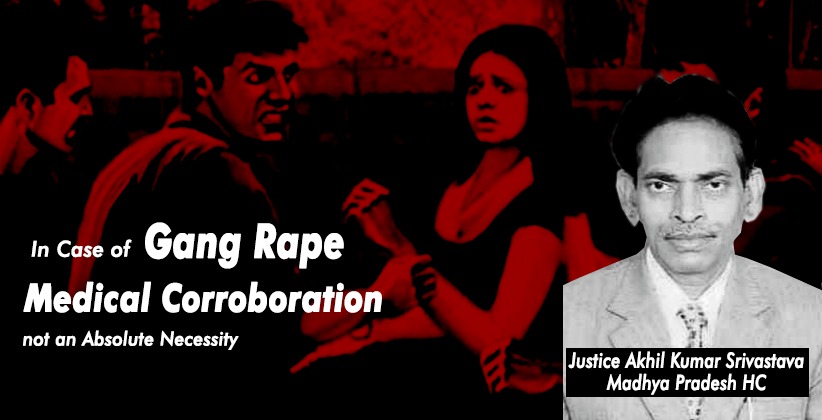 On Friday (16 October 2020), Madhya Pradesh High Court noted in an order that, in cases of gang rape, medical corroboration is not an absolute necessity. While hearing an appeal filed under section 14 A of the SC and ST Act, passed on 9 June 2020, Bench of Justice Akhil Kumar Srivastava refused to grant bail passed by a special judge of SC and ST, Jabalpur Court.

Since 5 September 2018, the accused was in custody for the offences under section 363 (punishment for kidnapping), 366 (kidnapping, abducting or inducing women to compel her marriage), 344 (wrongful confinement for more than 10 days), 328( causing hurt by means of poison, etc., with intent to commit and offence), 506( punishment for criminal intimidation), 376( 2) (N) ( punishment for rape) and 376 (D) (gang rape) of IPC and Sections 3(1)(w)(i) and 3(2)(v) of SC and ST Act, registered at Police Station Ghampur District, Jabalpur, Madhya Pradesh.

It was submitted that there was a delay in lodging the FIR in which no explanation was given and there was no direct or indirect allegation against the appellant. The Appellant mentioned that he was married to the victim for which an affidavit was sworn by her was filed with the bail application. And also it was heard that there might be a possibility of tampering of evidence or absconding from the appellant side. Hence he shall be given bail.

But as per the panel lawyer, he opposed the bail application and prayed for its rejection on the ground that it is a matter of gang rape and the victim’s statement were recorded under section 164 of CrPC, where the prosecutrix clearly gave a statement against the appellant.

“After hearing counsel for both the parties and the entire material available in the PDF format and the fact that it is a case of gang rape and delay in lodging the FIR in rape cases is no ground to discard entire prosecution case and it is also not necessary that medically it should be corroborated and looking to the statement of prosecutrix recorded under section 164 of CrPC and other material available in PDF form and considering the entire material on merit, this Court is of the view that it is not a fit case in which the appellant- Harishchandra may be released on bail under section 439 of CrPC filed under section 14-A of (POA) Act.” Hence the appeal was dismissed.