CIC Enables Wife to Obtain Details on the Income Tax Returns of Husband Under the RTI Act, 2005 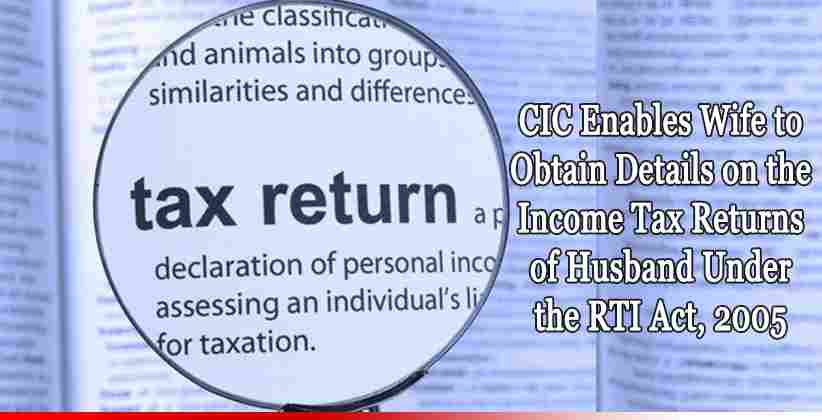 Judiciary Nov 23, 2020 Atharwa Gauraha ( Editor: Ekta Joshi ) 6 Shares
6 Shares
In considering an appeal from a woman, the central information commission (CIC) held that the wife may request information related to the income of the husband under the Right to Information Act, 2005.

In the present case, the central public information officer (CPIO) denied the initial plea and the first appeal was also dismissed, leading to the second appeal before the CIC. Via an RTI filing, the appellant requested her husband's income tax returns for 2017-2018. The appellant submitted that it was entitled to obtain information under the RTI Act, 2005 but the respondent objected that the information relating to the income of an individual was private in nature and could not, under the said act be revealed to a third person. The respondent further submitted that the disclosure4 of such information to the appellant was also refused by the husband. The CIC after hearing both sides placed reliance on the Supreme Court judgment in Girish Ramchandra Deshpande vs. Central Information Commission & ors. in which it was held that information in the income tax return of an individual were personal and were exempted from disclosure pursuant to section 8 of the RTI Act, but further noting the distinctions taken in Smt. Sunita Jain vs. Pawan Kumar Jain and others where the court held that the wife was entitled to know about the remuneration of her husband.

In the case of Rajesh Ramachandra Kindle vs. Maharashtra SIC and Ors, the CIC further referred to a Bombay high court judgement in which the court also held that the wife was entitled to know the information related to the salary of the husband and that information was no longer personal to the husband alone. The information commissioner Neeraj Kumar Gupta thus favored the appellant’s side and said “Taking into consideration the aforementioned analysis and the judgments of the Higher Courts, the Commission directs the respondent to inform the appellant about the generic details of the net taxable income/gross income of her husband held and available with the Public Authority for the period 2017-2018, within a period of 15 working days from the date of receipt of this order.” The Commissioner disposing of the plea also claimed that it was not appropriate to reveal any other personal details of a third party to the appellant.