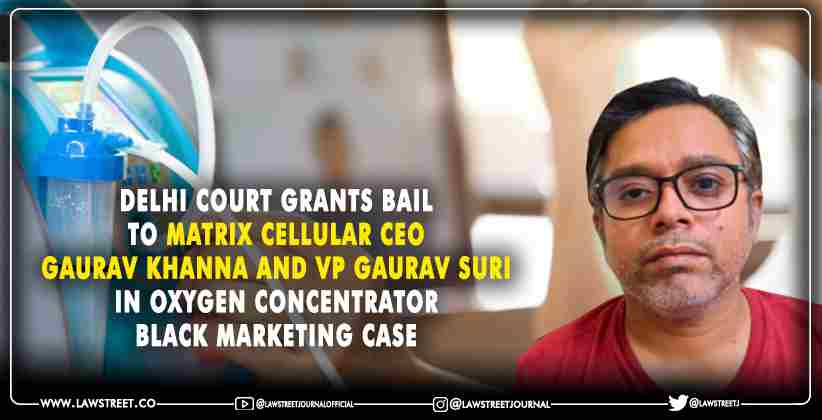 The Chief Metropolitan Magistrate’s Court in Saket, Delhi on Wednesday (12/05/2021), granted bail to Matrix Cellular’s Chief Executive Officer Gaurav Khanna and Vice-President Gaurav Suri in the case related to alleged hoarding and black marketing of oxygen concentrators in the capital.

During the hearing, the accused denied the allegation of black marketing of the medical devices. It was submitted that the prices were fixed considering the cost incurred in importing and selling the device in times of high demand. Further, it was argued that there was no order capping the price of the device when the raids and arrests happened.

It was argued by the accused that the customs duty on the imports were duly paid and the sale was taxed under the GST regime. It was further argued that the investigation and arrest were of the nature of a "fishing and roving inquiry". The accused also submitted that the devices were imported not only from China but also from Europe and the mobile application used to sell the oxygen concentrator was functioning from 2016.

After hearing the matter and studying the documents submitted the court asked about an earlier order placed by the government itself, for 100 oxygen concentrators from Matrix Cellular.

The court asked during the hearing:

“Is doing business in this country an offence? You say we won't impose lockdown, so businesses are not affected. Now, these people have imported. There are no allegations of tax or customs duty evasion.”

“The officer has not yet been able to negate the story that they imported something and paid Customs duty. All payments have been accounted for, IGST, SGST has been paid. If the government is accepting, the tax department has the information. Nothing was concealed.”

The court pointed out that if private firms are charging exorbitant rates from the citizens the government must regulate them but no such orders were issued by the government on or before the date of raids and arrests.

The bail was granted to the two accused subject to a personal bond of Rs. 50,000 and surety of like amount.

In a related development, Matrix Cellular has also approached the Delhi High Court to immediately release the seized oxygen concentrators.