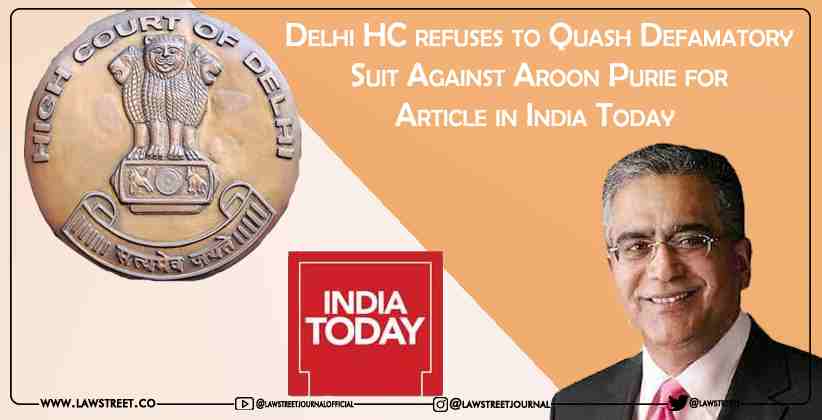 The said order was passed by a single judge Bench of Justice Yogesh Khanna.  This case pertains to a news item 'Mission Misconduct.’

While defending himself, Purie stated that allegations of sexual harassment and financial irregularity were made against the Complainant along with steps taken for initiation of disciplinary proceedings as at the time of the publication of the said news item. Therefore, he submitted that the impugned item only reported a fact that was well within the public record.  He submitted that as per Section 202 CrPC(mandatory enquiry into where the accused was residing), Section 196 (2)(previous sanction of the Central Government or of the State Government or of the District Magistrate for certain offences) and Section 197 CrPC(Prosecution of Judges and public servants), the summoning order was liable to be quashed.

The Respondent called it "unsubstantiated and un verified defamatory story" and said that India Today published it with absence of a basis. He also highlighted how the story had been published prior to the him receiving any show-cause as for the alleged misconducts.

He further explained his agony by saying that the contents of the article still haunt him even after he has retired and is still determined to pursue the litigation.  The Court took note of all the arguments and said that Section 196 (2), CrPC could not deemed to be relevant as per all the things taken note of. Additionally, it opined initiation of proceedings had been done after applying due diligence and process of law vide a summoning order. Therefore, the said argument was rejected by the Judge saying that no sanctions were required to initiate a criminal action against Purie as he was neither a Judge, nor a Public Servant.  The Court further made a statement that as and when the matter concerns Section 202, CrPC it might not mandatorily mean an enquiry by examining witnesses or by holding an investigation into the case or in any particular form. The court said the following while noting that the summoning order had been issued on the basis of pre-summoning evidence, for the offences being punishable under Section 499,500,501,502 IPC read with Section 120B IPC.:

"The Magistrate can do it in any way he thinks proper. Moreover, the accused persons against whom the summons’ were issued were all within the jurisdiction of the learned Trial Court, New Delhi District."

The Court observed that Section 482, CrPC could not hold significance in matters of allegations and counter allegations made by the parties that were raising disputed question of facts.

It said, "At this stage we need to see only the contents of the complaint. The evidence of the accused cannot be considered at this stage."

The Court further noted, "..the assertions the news item merely reported facts which were accurate and reflected public records and cannot be held to be defamatory, cannot be accepted. Rather such assertion and who was responsible for its publication and has it come to the fore of editors require critical examination and hence evidence of these issues is required." It enlightened Purie that he must approach the Sessions Court first to challenge the summoning order as a matter of prudence and proprietary.

"Even though powers under Section 482 Cr.P.C are very wide and the petitioner always has the liberty to invoke either of the jurisdictions whether it is under Section 397Cr.P.C or Section 482 Cr.P.C being concurrent one, but the propriety demands that elder superior court in hierarchy must be approached first..High Court can be approached first in circumstances where the lower court has directly or indirectly interfered in the investigation or trial through its order or action, which justice demands High Court alone should interfere in an order of the Magistrate. It is not so in the present case."

The court dismissed the petition while concluding that there were no viable grounds that could interfere with the ongoing trial as under Section 482, CrPC. Saurabh Shukla’s petition who is the correspondent concerned, was also dismissed.