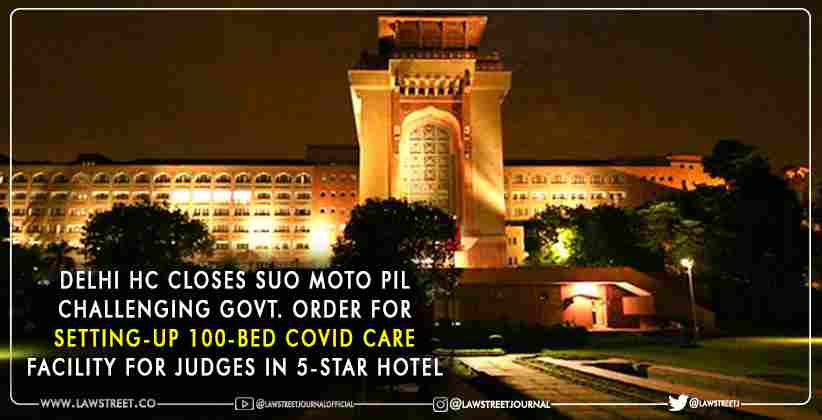 The Delhi High Court on Thursday (29/04/2021), closed the hearing on a Suo Moto Public Interest litigation it had taken up after the Delhi governments notified the withdrawal of the impugned order.

The Delhi High Court on Tuesday (27/04/2021) took Suo Moto cognisance of news reports, alleging that the Court asked for 5-Star Covid Care Facilities for Judges and families while ordinary citizens are running pillar to post to secure a bed for their near ones, and questioned the Delhi Government on the veracity of the reports.

The matter was taken up by a bench comprising Justices Vipin Sanghi and Rekha Palli.

The court observed that the news reports were ‘very, very misleading’ and based on wrong inputs as the court never asked for such facilities.

The news reports were based on an order issued by the Chanakyapuri Sub-Divisional Magistrate office, invoking the powers under the Disaster Management Act 2005 and the Delhi Epidemic Diseases COVID19 Regulations 2020.

The impugned order stated that the Delhi High Court has requested for setting up a dedicated Covid Health Care Facility for Judges and their families. The order directed setting apart 100 rooms of the Ashoka Hotel for the said purpose. It was directed that the care of the patients at the hospital was to be given by Primus Hospital, a private hospital in Chanakyapuri. It was stated that all expenses incurred by the hotel are to be paid by the hospital which will be later reimbursed.

The court clarified that all it had asked for was appropriate facilities for the care of Judges, Court officers, Judicial Officers of Subordinate Courts and their families as the High Court has to care for them. The court observed that the Sub-ordinate Courts were forced to continue with a physical mode of hearing and many Judges and court officers have been infected.

“Many have gotten infected; their families have gotten infected and 2 judicial officers have died. Our concern was as their well-wishers, as it falls upon us to take care of them. All we wanted was that if they need hospital admission, a facility should be available, we never asked to make any such facility with 100 beds”