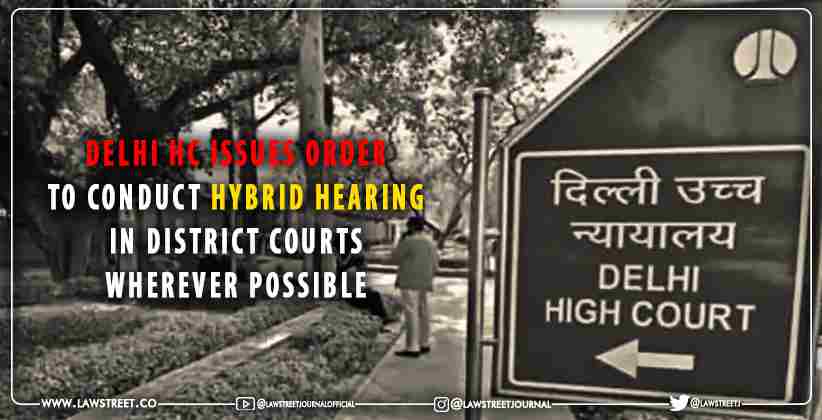 The issuance of this direction came after the Administrative and General Supervision Committee of the Delhi High Court today resolved to permit hybrid hearings in cases where a request to that effect is made by the counsel of parties. As per the Office Order, the decision has been taken by the Committee to avoid crowding in District Courts.  Further considering the fact that the infrastructure for facilitating hybrid hearing in the district Court, a few regulations have been taken into account, being: -

Additionally, the Office Order requests the President and Secretaries of the respective District Courts, Bar Association(s) at extending full cooperation to the District Court administration and shall issuing suitable directions in order to ensure that there is no crowding in the Lawyers' chambers as well. Additionally, the Advocates have also been asked to advise their client no to visit the Court unless their physical presence has been directed by the Court. Significantly, an intervention application has been filed in the Delhi High Court in the PIL on restoring physical mode as per the order dated 9th March 2021, in order to support a hybrid system of hearings in all courts, tribunals, and other adjudicating authorities keeping in view health of the general public, traffic congestion, difficult parking, and air environment of the national capital. It is pertinent to cite that the Delhi High Court vide it's order dated 9th March 2021 directed that all Delhi courts will begin physical functioning in full force from March 15 and that hybrid hearing mode though available will only be allowed only in exceptional cases. Recounting that the hybrid hearing mode will only be an exception and not the norm, the Delhi High Court on (12th March) issued a few crucial directions. So far as District Courts are concerned, the High Court had observed that in the lack of the infrastructure for a hybrid form of hearing, the arrangement of a similar setting cannot be directed for the District Court for the time being.     [READ ORDER]