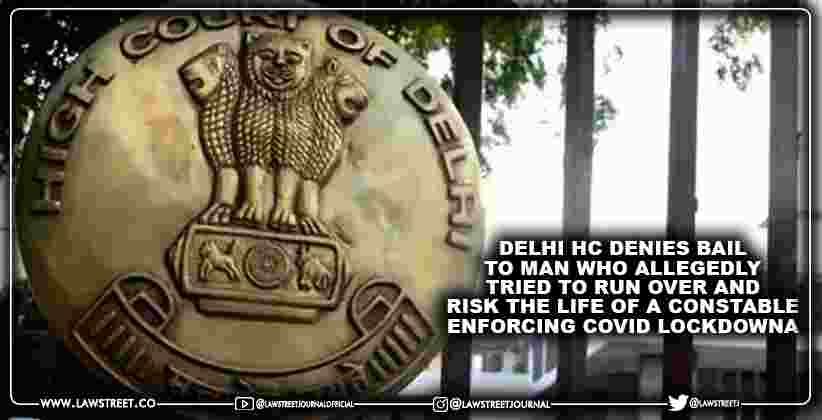 The Delhi HC recently denied bail to a man who allegedly tried to hit and run over a constable who was ensuring that the lockdown restrictions are followed.

The Bench consisted of Justice Mukta Gupta. It was hearing the petition under sections 186/188/269/332/120B/308 IPC section 51 of the Disaster Management at PS Vasant Kunj, North Delhi.

As per the details, constable Inderjeet was carrying out his official duty on police picket on 21st April, 2021 at Mahipalpur and he was checking the vehicles and enforcing covid-19 curfew conditions and ensuring that every guideline is followed and adhered to.

Allegedly, at 4:00 PM, he came across a vehicle (Maruti Suzuki Ertiga), approaching towards the picket, where two people without masks were being held, the constable signaled the vehicle to stop and asked the respective people to park on the left side. However, the petitioner who was driving the vehicle, instead of going through the directions given by Constable Inderjeet, tried to run over him.

Due to the impact, Constable Inderjeet fell on the bonnet of the car, and the Petitioner started driving in a zig-zag manner.

The counsel representing the petitioner submits that the petitioner was on his way back from dropping his cousin at the airport. He argued that the injuries to the police officer are simple in nature and the petitioner in available for any other inquiry.

The APP for the State stated that the manner and the behavior of the petitioner has been captured in the CCTV camera, and Constable Inderjeet only stopped them to ensure they were following the guidelines. He added, that the petitioner, instead of stopping, accelerated the car and hit the Constable.

“Journalists are entitled to protection against sedition,” says Supreme Court