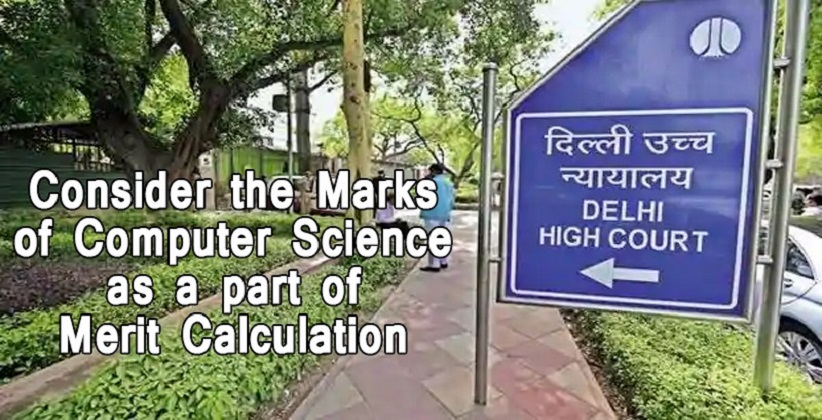 Judiciary Sep 22, 2020 Upendra Malaviya ( Editor: Ekta Joshi ) 4 Shares
4 Shares
The High Court of Delhi ordered for the consideration of Computer Science as part of the subjects for calculation of merit for admission to B.Sc. (Hons.) Physics and other related courses does not stand to reason. The Court however mentioned that a change in criteria for admission would not be suitable for admission and will be considered from the next Academic year that 2020-21 as the process is already underway.

Hon’ble Justice Pratibha M. Singh has directed Delhi University to relook the course structure and eligibility criteria and make necessary changes within time so the students like petitioner are not put into hardship for the upcoming academic years. The issue arose when the writ petition was filed by the class XII pass- out from the Science Stream of ICSE Board knocked the doors of High Court for seeking the direction in the matter that Computer Science marks in Class XII ought to be considered while adjudging merit for admission to the B.SC. (Hons.) Physics course in the University of Delhi.

For which the Court directed the DU to reconsider and modify its criteria for admission in forthcoming years. "Whether it is in the case of selection for employment or admission in educational courses, the rules of the game cannot be changed after the race hasbegun. The process of admissions to undergraduate courses is a two year long process which commences with students taking admission in class XII, choosing the subjects, undertaking preparations, giving various tests and examinations finally culminating in the Class XII board exams or the PreUniversity examinations…Most students who wish to seek admission in B.Sc. (Hons.) Physics course in DU would be more than aware that Computer Science will not be counted in calculating merit. They would have undertaken their preparation and given the examination in the said backdrop." HC Said.  Court further found the relevancy of CS and pronounced "Any course in Physics would require teaching of Computer Science. In the counter affidavit of DU itself, it is admitted that computer programming is taught in the B.SC. (Hons.) Physics course to students.” The Petitioner also asked the logic of taking best of four while considering admissions to Computer Science (Hons.) but not considering CS relevant for admission to BSc. (Hons.) Physics. For which after emphasizing the importance of the subject court stated “technological developments have shown that Computer Science would be a subject which would be relevant not just for Science stream under-graduate courses but even for various other courses such as Economics, Statistics, Finance etc., Flexibility and choice in subjects is absolutely essential, inas much as, it is not uncommon to see students wishing to pursue Economics or History, also wanting to study Computer Science. Such strict boundariesin fact tend to ignore the overlaps and requirements of modern education. Even students studying Economics and Statistics may have pursued Computer Science in their XII standard and it cannot be said that the said subject is not relevant for pursuing B.A. in Economics or Statistics. Any rigidity in providing combination of subjects results in stultifying growth of students." The court at the end quoted the Charanpal Singh Bagri and Ors of 2019, said it is clear that DU have flexibility to make changes to its eligibility criteria and directed DU to relook the course structure and criteria and make necessary in the upcoming academic year.