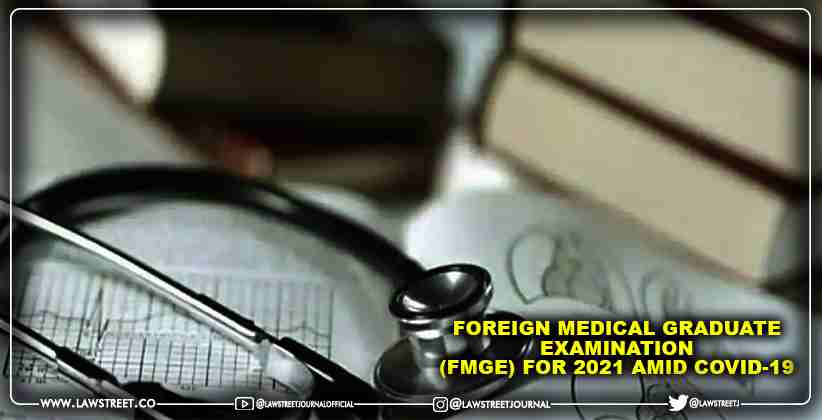 On an application filed by the Association of MD Physicians, the Delhi High Court dismissed an application seeking to postpone the Foreign Medical Graduate Exam, 2021 (FMGE).

FMGE, also known as the Medical Council of India Screening Test, is an Indian licensure examination administered by the National Board of Examinations (NBE) as a mandatory requirement for an Indian citizen with a medical degree from a college outside the country to practise medicine in India.

The exam will take place on June 18, 2021. The case was being heard by Justice Amit Bansal's vacation bench. The petition, which was filed by the Association of MD Physicians through its President Dr. Rajesh Rajan, requested that the exam be postponed to August due to COVID-19, claiming that "most of the students have not been vaccinated and many have elderly and COVID-19 patients at home."

Adv Aditya S Pujari, who was representing the petitioners, said that while the exam was postponed for a month when there was no pandemic, it is not being postponed now, despite repeated pleas and the threat of COVID-19.

The Centre argued that this is merely a licensure examination, and that those who are unable to take it in June may do so in December. Kirtiman Singh, Additional Standing Counsel for the Centre, and Adv. T Singhdev claimed that it has already ensured that all necessary safety protocols, as recommended by the investigation committee, are followed. Singhdev also stated that the exam is intended to increase the number of practising doctors at a time when the COVID-19 pandemic is raging in waves.

Adv Adit S Pujari for the petitioner had argued that logistics would be inconvenient, as well as pose a risk of COVID-19 infection for those taking the exam. He said, "In India, there are 46 centres. When people move from one location to another, they must have a negative RT PCR report and must register in the city. I need to arrive one day before the exam. I also have to arrive early and will not be allowed to bring cell phones or other valuables inside, so I'll need to bring someone with me to look after my valuables."

According to the plea, "The third wave of Covid-19 'Delta variant' has already been reported in a number of cities; even vaccinated young citizens are at risk, so postponing the exam is a wise decision. It will be safe to conduct the exam in August 2021, as it was last year, because the number of COVID-19 cases will have decreased by then, and the majority of people will have received at least the first dose of vaccine."

The petitioner had requested a four-week postponement and the addition of more examination centres on these grounds. Candidates should be able to store their belongings in the exam centres, according to the association. The Centre responded by stating that approximately 18,600 students have registered to take the exams in June and that there are 98 centres in 52 cities, which is more than double the number of centres in the pre-COVID era.

Adv. Kirtiman Singh, Additional Standing Counsel for the Centre, raised preliminary objections to the petition, claiming that it was flawed because the Association was not authorised to file a petition on behalf of the students. The Court then ordered the Petitioner to file the resolution allowing the association to file the current petition on the record.

The Court also ordered the Centre to file any documents demonstrating that COVID considerations were taken when the exams were held in mid-June.

Judiciary Jul 29, 2021 Saakshi S. Rawat ( Editor: Ekta Joshi ) 0 Shares
0 Shares
The Delhi Municipal Corporations have been ordered by the High Court on 27th July, 2021, to produce a status report detailing the efforts they have taken to avoid mosquito infestation in the national capital, particularly in light of the upcoming monsoon season.In a suo moto PIL on the problem, a Division Bench comprising Chief Justice DN Patel and Justice Jyoti Singh issued the order.The CJ instructed the Respondents, “File the most recent status report, taking into account the monsoon...
Read full post