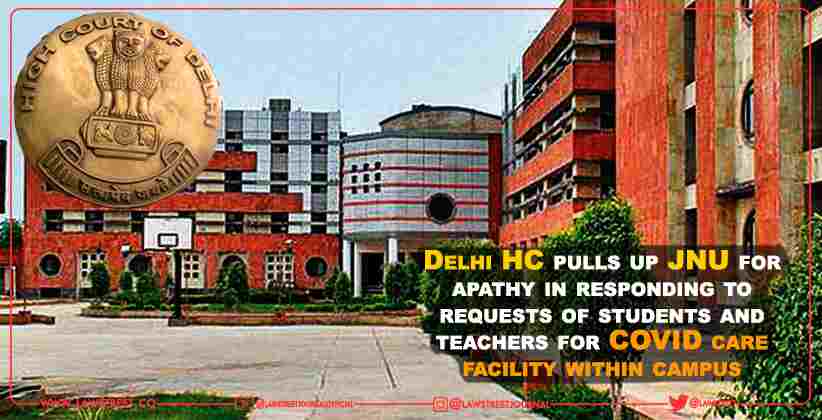 The Delhi HC criticized JNU on Tuesday( May 11, 2021) for not reacting with alarming concern as COVID cases continue to rise in a plea filed by the students and teachers seeking a COVID care centre as well as oxygen production facilities to be set up in the campus.

The bench consisted of Justice Pratibha M. Singh issued notice as well as few guidelines and directions, while taking a critical note of university’s failure to tend to the needs of the students and teachers since 13th April, 2021.

The order states, “The University is bound to take care of its students and is supposed to look after their health, it should also provide the students with the adequate facilities within the university, especially in a situation like this. Judicial note can be taken of the fact that various organizations and institutions have gone out of their way, during the current pandemic to make sure the employees and other stakeholders are alright. To safeguard their health.”

The plea was filed by Advocates Abhik Chimni, Lakshay Garg and Shashwat Mehra. It prayed to the court that the respondent must consider the three-tier consolidated plan as prescribed by CSMCH. It also prays for a mandamus directing the university to appoint a new covid response team consisting of people with technical expertise.

Further it sought imposition of a cost of Rs. 1,00,000/- upon the VC for poor handling of the pandemic, which led to the lives being risked.

It was submitted by Adv Chimni before the Court that “right to life and health of all occupants of the campus is in serious jeopardy.”