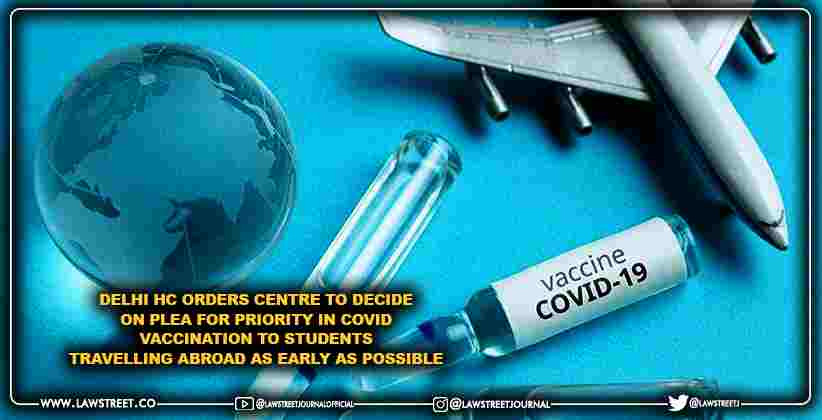 The Delhi High Court on Monday, May 31, 2021, directed the Central Government to decide on giving priority in Covid vaccination to NRIs and students who have to go abroad, as early as possible. A bench of Chief Justice DN Patel and Justice Jyoti Singh said the representation of May 20 by NGO Pravasi Legal Cell be decided in accordance with the law, rules, regulations and government policy applicable to the case.

Pravasi Legal Cell, in its plea filed through advocates MP Srivignesh, Robin Raju and Deepa Joseph, claimed that NRIs who came to India during the Covid-19 outbreak globally, have to now return to their respective countries where they reside or work in view of decline in infections in many countries and resumption of international flights. The petition said that foreign nations only allow entry to those persons who are vaccinated and if preference is not given to such individuals, it would badly affect them.

The plea also stated that most foreign countries especially, the US and European Countries are only permitting the students who are vaccinated and thus, it is important to give priority to such students as the academic sessions in the US, the UK and other European countries commences from August-September.

Furthermore, it was stated that people who have received both doses of Covaxin, manufactured by Bharat Biotech, are not allowed to travel internationally, as the vaccine has not been included in the World Health Organisation’s (WHO) Emergency Use Listing (EUL) yet.

Thus, it requested the Centre to take necessary steps as soon as possible and ensure that the people traveling abroad after being fully vaccinated with both doses of Covaxin, face no troubles.