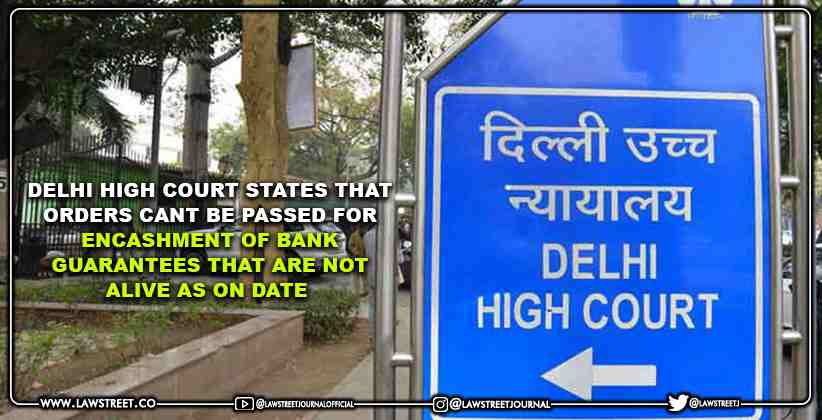 An appeal seeking encashment of bank guarantees issued in the year 2013, and that expired in 2016 was dismissed by the Delhi High Court.

The Court was hearing an appeal against a single Judge order denying relief to the original petitioner, an importer selling goods to global brands.

It was alleged that though goods were supplied by the appellant to some global brands, no consideration was received. Following this, the appellant requested the concerned bank for encashment of bank guarantee, which was denied.

Senior Advocate Ritin Rai for the appellant argued that the bank guarantees were unconditional in nature and therefore the bank should have allowed its encashment.

There were certain observations made by the Court such as the fact that as on today the bank guarantees in question are not alive. The life of bank guarantee came to an end in the month of March in 2016, it noted.

The bench further stated that -

“It ought to be kept in mind that no bank guarantee can be allowed to be encashed if it is not kept alive as on date of passing of orders."

Furthermore, the Bench noted that no suit had been filed by the appellant for recovery of consideration after supplying goods to global brands.

CIVIL SUIT BY THE BANK

Furthermore, the bank concerned had already filed a civil suit against the appellant and global brands wherein the prayer was that bank guarantee was unenforceable. An appeal against that suit is also pending before the Court.

“Bank guarantees that are not alive as on today cannot be encashed. It's a simple piece of paper, that's all. At best, the aggrieved party can file a suit for recovery for damages”.

The Bench further held that,