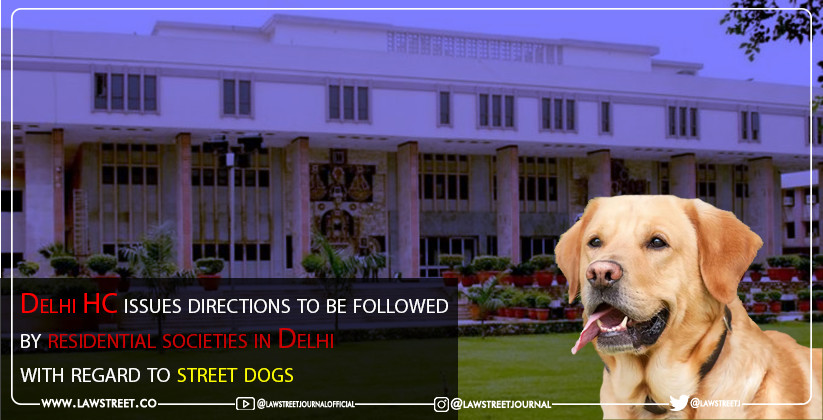 Judiciary Mar 02, 2021 Namya Bose ( Editor: Ekta Joshi ) 0 Shares
0 Shares
Justice Pratibha Singh in the Delhi High Court, recently issued directions to be followed with regards to street dogs that are in residential colonies. A petition filed against the Residents Welfare Association by 3 animal lovers from the area of Vasant Kunj, New Delhi, for causing hindrance in feeding and taking care of the street dogs.

The HC observed a previous 2009 order given in Citizen for the Welfare and protection of Animals and Anr. v. State where clear directions were given by the Court for both parties to find a suitable spot or specific area in the colonies for the street dogs to be feed in. The Court then stated, “each colony of Delhi, AWBI would identify, in consultation with Residents Welfare Association, Area SHO and the Animal Welfare Organization working in that area, the spots or sites e most suitable for the purpose of feeding dogs. The purpose of feeding dogs is to keep them confined to a particular place, so as to subject them to sterilization, vaccination and re-vaccination, as the vaccination does not last more than one year.” AIWB within 4 weeks had to identify the spots in as many different colonies it could.

The Court took notice of the fact that despite the 2009 order, no consensus in identifying any spots has been done rather now the Residents Welfare Association raised concerns and apprehensions because the open areas in the colonies was used by children and senior citizens to roam and for their recreation.   The Court gave orders that the petitioner must feed and take care of the street dogs in the specific spots as chosen by AWBI and no hindrances are to be caused to the petitioner in doing so. Both parties were directed by the Court to ensure and maintain peace and harmony amongst all the residents in the area so as to make sure no harassment is caused by any one party, to the other.   The judgement read,  “All the learned counsel appearing before meagree that in each colony of Delhi, AWBI should identify, in consultation with Residents Welfare Association, Area SHO and the Animal Welfare Organization working in that area, the spots/sites which in its opinion should be most suitable for thepurpose of feeding dogs. The purpose of feedingdogs is to keep them confined to a particular place, so as to subject them tosterilization/vaccination/re-vaccination, as the vaccination does not last more than one year. To begin with, the Animal Welfare Board shall identify suitable sites in the colonies, subject matter of these petitions, within four weeks from

today. It shall also try to cover as many morecolonies as it can during that period. Gradually,such sites will be identified in othercolonies/localities of the city. In the meantime, the Delhi Police will ensure that no harm is caused to the volunteers of Animal Welfare Organizations feeding dogs in these localities provided that they feed them only during hours to be specified by Animal Welfare Board andprovided further that as soon as suitable sites forfeeding the 41 dogs are identified, these organizations will feed dogs only on those identified sites and at hours specified by Animal Welfare Board.”