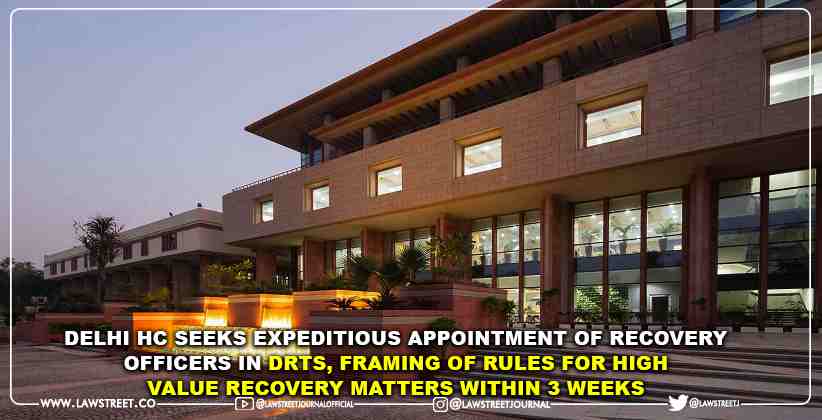 The Delhi High Court has ordered the Centre to appoint Recovery Officers in Debt Recovery Tribunals across the country as soon as possible.

A Bench of Justices Vipin Sanghi and Jasmeet Singh requested that a status report detailing the progress made thus far be filed on November 17, the next date of hearing.

The Bench was hearing a petition that alleged a delay in the resolution of high-value recovery cases pending before Debt Recovery Tribunals. During one of the earlier hearings in the case, the Court directed the respondents to form a committee to investigate the situation.

The development came after the Court was informed that applications for 18 Recovery Officer positions were being accepted on an all-India basis.

The court said, “We direct the Central Government to ensure the appointments of Recovery Officers are made without any delay. Further status report– indicating the progress made in this respect, be filed before the next date.”

For the appointment of members to the DRTs, Advocate Ravi Prakash, appearing for the Centre, informed the Court that applications from across the country had been processed for 15 vacancies. While 69 applicants were found to be eligible, he claimed that 12 were found to be provisionally eligible.

Concerning the formulation of rules and regulations for dealing with high-value recovery matters, i.e., those exceeding Rs. 100 crores, Prakash stated that suggestions had been received from a number of stakeholders.

However, Advocate Manisha Agarwal, appearing on behalf of the petitioner, argued that banks and financial institutions should be allowed to make suggestions in the matter as well.

The court in this regard added, “There cannot be any dispute about the same. It shall be open to the petitioner as well as the association of banks and financial institutions to submit their suggestions to the Central Government within a week.”

The Bench directed the Central Government to publish all suggestions and responses received on their website so that all persons interested can read them.

It further added, “At least one week should be provided for the purpose of online interaction in this manner. After two weeks, the Central Government should hold an open house and invite all stakeholders in a physical meeting and thrash out all the proposals and on the basis of the same, we expect the Central Government to place before this Court the rules and regulations that they propose to frame within three weeks.”

Earlier, the Court condemned the delay by Central Government in the appointment of Presiding officers to Debt Recovery Tribunals across the country.

The Court also took note that despite the Supreme Court directing for lawyers with 10 years standing or more being qualified to offer their candidature for appointment to the DRT, the respondent had till date not implemented the said decision.