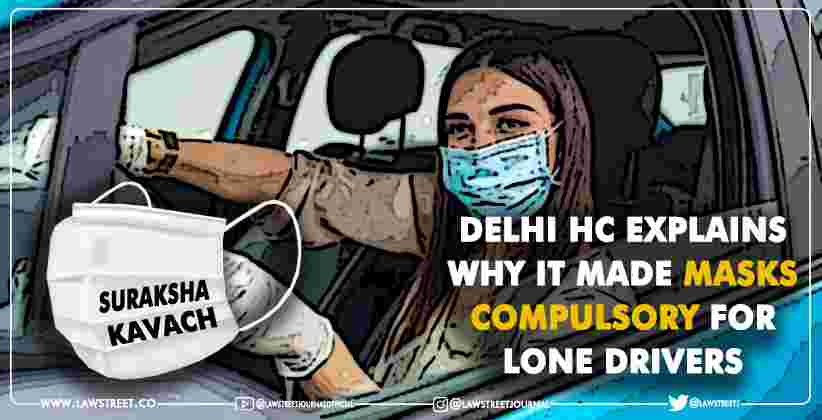 The Court termed a mask as a ‘Suraksha Kavach’ as it protects the individual wearing it along with the people in surroundings.  The "Scientists and international governments advise wearing of a mask. The challenge of the pandemic was enormous and the wearing of face masks is necessary whether a person is vaccinated or not."

This verdict was reserved on February 17, 2021. It has been passed now after dismissing various pleas that challenged imposition of fine on the said issue.  In this regard, the Court said that travelling alone in the car was a temporary phase only, and the driver could infact come into direct contact with various persons at any point during the commutation – for instance at traffic signals if and when making any purchases, to elderly family members, children or colleagues if they have been dropped or are going to be picked up.  Such persons can also be exposed to the virus if the occupant was not wearing the mask. The droplets carrying the virus can infect others even after a few hours after the occupant of the car has released the same. ONLINE POLLS INDICATE 59% PUBLIC DISAGREES WITH THE JUDGEMENT As per online polls conducted by LawStreet Journal across various social media platforms, the result indicated that 59% of the public disagrees with the Delhi High Court order that mandates wearing of masks even while driving alone in car.  RELEVANT OBSERVATIONS FROM THE JUDGEMENT  The relevant observations from the judgement authored by Justice Pratibha M Singh are as follows: “A person travelling in a vehicle or car even if he is alone, could be exposed to the virus in various ways. The person may have visited a market, or workplace, or hospital or a busy street, prior to entering the car or vehicle. Such person may be required to keep windows open for the purpose of ventilation. The vehicle may also be required to be stopped at a traffic signal and the person could purchase any product by rolling down the window. The person may thus, be exposed to a street side vendor. If a person is travelling in the car alone, the said status is not a permanent one. It is merely a temporary phase. There could be other occupants in the car prior to the said phase and post the said phase.  There could be elderly family members or children who may be picked from the school or even simply friends or colleagues may travel in the car in the immediate future. Such persons can also be exposed to the virus if the occupant was not wearing the mask. The droplets carrying the virus can infect others even after a few hours after the occupant of the car has released the same. There are several possibilities in which while sitting alone in the car one could be exposed to the outside world. Thus, it cannot be said that merely because the person is travelling alone in a car, the car would not be a public place.” “A vehicle which is moving across the city, even if occupied at a given point in time by one person, would be a public place owing to the immediate risk of exposure to other persons under varying circumstances. Thus, a vehicle even if occupied by only one person would constitute a ‘public place’. The court also observed in the judgement that lawyers had a higher duty to comply with public health protocols, owing to their legal training.  “The court would also like to add that all the four Petitioners in these cases, being advocates/lawyers ought to recognise and assist in implementation of measures to contain the pandemic, rather than questioning the same. Advocates as a class, owing to their legal training have a higher duty to show compliance especially in extenuating circumstances such as the pandemic.” During the proceedings, the Ministry of Health and Family Welfare had submitted that no guidelines were issued by it for a person to wear a mask driving alone. Health is a state subject and therefore, Delhi Government has been endowed with the responsibility to issue sanctions on it.  In response, the Delhi government enlightened the Court that the impugned rule had been made compulsory by an office order in April, 2020 and it still remains in force.  Sudesh Kumar, one of the Petitioners submitted how he was challaned even though he had covered his mouth and nose with a scarf while driving. His Counsel specified that the challan issued by the Sub-Inspector lacked mention of date and time along with the fact that the challan booklet was pre-stamped and signed by a Magistrate. In addition to this, no receipt had been issued to Kumar.  While highlighting a press conference by the Union Health Ministry after the order of Delhi Disaster Management Authority (DDMA) dated April 4, 2020, saying it wasn’t compulsory to wear a mask while driving alone, Sharma contended it was a failure on part of the officials to not be able to produce an executive order making the impugned rule mandatory.  He also submitted that the levy of fine on him was "ex-facie arbitrary and illegal” owing to the absence of production of the notification or order.  As against this petition, Advocate Saurabh Sharma demanded a compensation of Rs 10 lakhs for wrongful imposition of fine saying it wasn’t mandatory to do so in their personal vehicle while travelling alone. This is when Delhi Government clarified that personal vehicle cannot said to be a private space.  An affidavit was filed by the Delhi Government on the said issue that stated that the Regulations/Directives/Guidelines are crystal clear and say that "any person" moving around in his personal or official vehicle must be wearing masks mandatorily. It also pointed out that even though a personal vehicle could fall into the said category, however it cannot said to be a private zone. Lastly, a judgement of the Supreme Court was also quoted for the same, in which it was held that when a private vehicle passes through a public road, the public has the opportunity to "approach the private vehicle" and additionally have access to it. 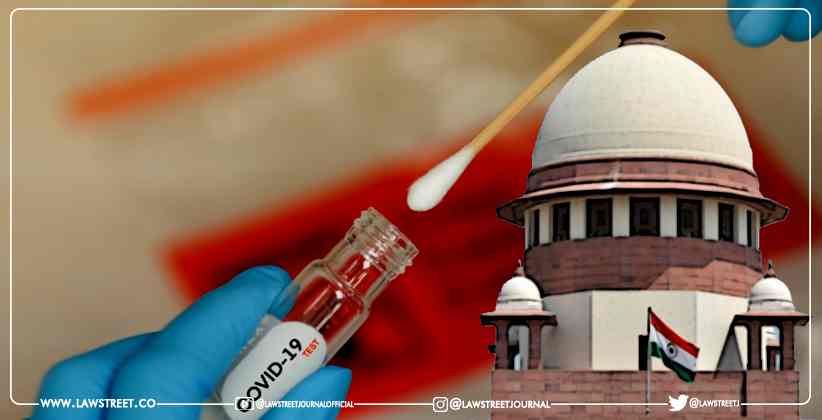