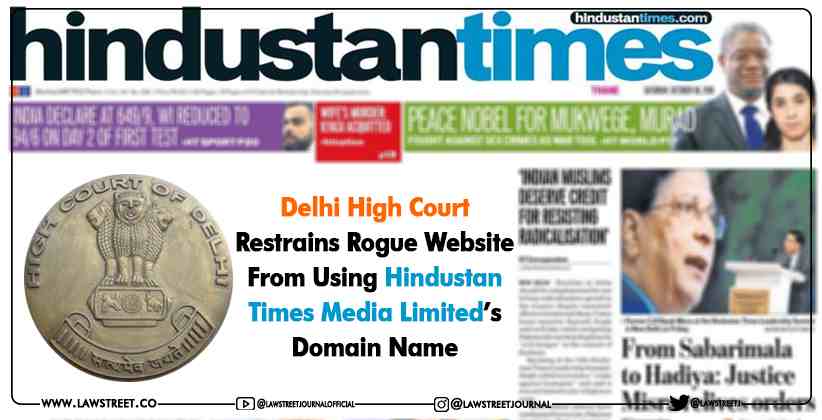 On Friday, the Delhi High Court granted an ex-parte ad interim injunction in favour of HT Media Limited, which publishes news in multiple languages under the registered trademark Hindustan Times, against a rogue website with a domain name that is deceptively similar. (Ht Media Limited & Anr. v. www.hindustantimes.tech & Anr.)

The Hon'ble Justice Pratibha M. Singh issued an ex parte ad interim injunction in favour of HT Media, prohibiting the use of www.hindustantimes.tech, which consists of the word "Hindustan Times." It also prohibited the website from publishing any content, such as articles, stories, columns, reviews, etc., because doing so would violate HT Media's copyright.

Examining the printouts of the website www.hindustantimes.tech, the court found that several news items on the website were targeted at Indian and even Delhi-based internet users.

"There is no doubt in the mind of the Court that Defendant No.1 intends to encash the goodwill of the Plaintiffs in the mark/name 'Hindustan Times' and also promote its website to the Indian audience."

The also said that,

"The mark 'Hindustan Times' is the registered trademark of the Plaintiffs. The Plaintiffs commands a global viewership and the reputation of one of India's oldest newspapers. The manner in which the mark/name 'Hindustan Times' has been completely misappropriated leaves no manner of doubt in the mind of the Court that Defendant No.1 intends to misuse the said mark as also the content which is published by the Plaintiffs on their website."

According to the plaintiff, the impugned website offered identical services to those given by HT Media, namely online journalism and news publishing services. Thus, it was submitted that the said website also reproduced, published, and made available news, articles, and columns written and published by the Plaintiffs on their website, 'www.hindustantimes.com'.

The court observed that,

"The manner in which 'WHOIS' details of the registrant of the website 'www.hindustantimes.tech' are completely masked shows that Defendant No.1 has taken enormous pain to not reveal its identity as to who is controlling the said domain name."

In addition, the court ordered the website's registrar or host to immediately block the domain name in question and access to www.hindustantimes.tech.

In addition, the court ordered the website's registrar or host to immediately block the domain name in question and access to www.hindustantimes.tech.

Along with directions to the Department of Telecommunications (DoT) and Ministry of Electronics and Information Technology (MeitY) to issue directions to all the ISPs to block the impugned website 'www.hindustantimes.tech' the Court also directed various internet service providers to block access to the said website in India.

The Court further said that every registrar is bound to enforce and implement orders issued by a court of competent jurisdiction, failing which ICANN (Internet Corporation for Assigned Names and Numbers) can be directed to terminate its accreditation agreement with the registrar in question.

The Court ordered that,

"In view of the above clause, a copy of this order is directed to be communicated to ICANN at its email address: legal-intellectual- property@icann.org, privacy@icann.org, globalsupport@icann.org by the ld. Counsel for the Plaintiffs."