Judiciary Jan 18, 2021 ADITI AGGARWAL ( Editor: Ekta Joshi ) 9 Shares
9 Shares
Whatsapp had updated its privacy policy on January 4, 2021 wherein it made it compulsory for its users to accept its terms and conditions, failing which the accounts and services would be terminated after a certain period. This policy has been in a controversy seen then. Delaying the new privacy policy update on 16th January, WhatsApp said: 'No One Will Have Their Account Deleted on Suspended On Feb 8.'

Advocate Chaitanya Rohilla challenged Whatsapp's updated privacy policy stating that the updated Policy gives the Company virtually a 360-degree profile into a person's online activity.  Observing the voluntary choice given to users to use or not to use WhatsApp, which is a ‘private app’, the Delhi High Court on Monday (January 18, 2020) said that it will only issue notice in the petition once it understands the concern of the petitioner against the application.

Single judge bench of Justice Sachdeva said to the petitioner: "I doubt that you have read any of the policies of any of the apps, you'll be shocked as to what all you consent to, and it is all voluntary, if you don't want, don't use the app. I am yet to understand your concern. Until I understand it, I will not issue notice on your plea."
STATEMENTS BY PETITIONERS: The petitioner has contended that the updated privacy policy violates users right to privacy under the Constitution and claimed that the new privacy policy of WhatsApp allows full access into a user’s online activity without there being any supervision by the government. It also claimed that the option not to agree with the new policy was given to users in European nations, but not in India.

"The High Court is not going to make laws, if you want new laws, go to the Parliament," Sr. Adv. Rohatgi said on the petitioner's statement that there needs to be a law regulating these apps.

He urged the High Court to issue an injunction order, restraining WhatsApp from enforcing the updated privacy policy, with immediate effect. He also sought guidelines/ directions to ensure that any change in Privacy Policy by WhatsApp is carried out strictly in accordance with the Fundamental Rights. He sought a direction upon the Central Government to exercise of its powers under Section 79 (2) (c) read with Section 87 (2) (zg) of theInformation Technology Act for ensuring that WhatsApp does not share any data of its users with any third party or Facebook and its companies for any purpose whatsoever.   ARGUMENTS BY REPRESENTATIONS OF WHATSAPP AND FACEBOOK: WhatsApp and Facebook, represented by senior advocates Kapil Sibal and Mukul Rohatgi told the court that the plea was not maintainable and many of the issues raised in it were without any foundation.

WhatsApp challenged the very maintainability of the petition stating that users had the option to use the business app or not whereas Facebook submitted that, "The app is completely safe to use. Let the petitioner be reassured that all chats between friends, relatives, etc will be encrypted and safe."

The judge asked the petitioner to elaborate its concerns against the app but even after hearing the arguments of the petitioner, the court said that it could not understand what data would be leaked according to the petitioner.The court further said that since the issue requires consideration, it will be listed again on January 25, 2020 due to paucity of time on the said day of the hearing. 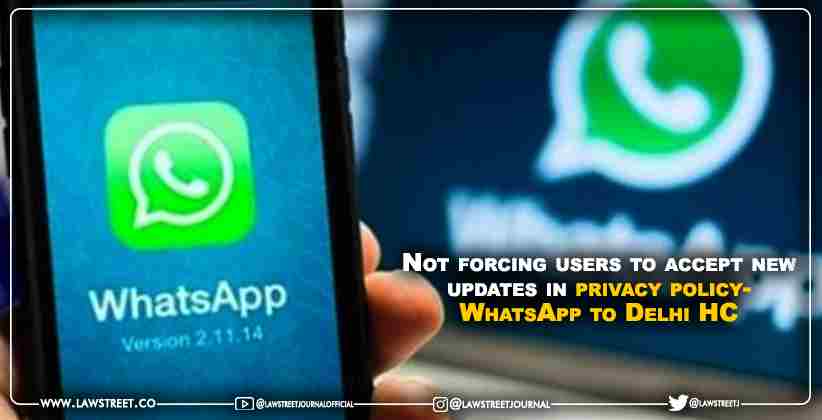 Business May 17, 2021 Pariyal Gupta ( Editor: Ekta Joshi ) 0 Shares
0 Shares
In an affidavit filed by the Facebook-owned company WhatsApp, it submitted that it is not forcing its users to accept the 2021 update in its privacy policy as it is not mandatory. This statement came in reply to a petition filed before the Delhi High Court which challenged WhatsApp’s 2021 privacy policy update as being violative of Article 21 of the Constitution as it does not provide its users with the option to opt-out of the policy.WhatsApp stated that its users are given the liberty to...
Read full post 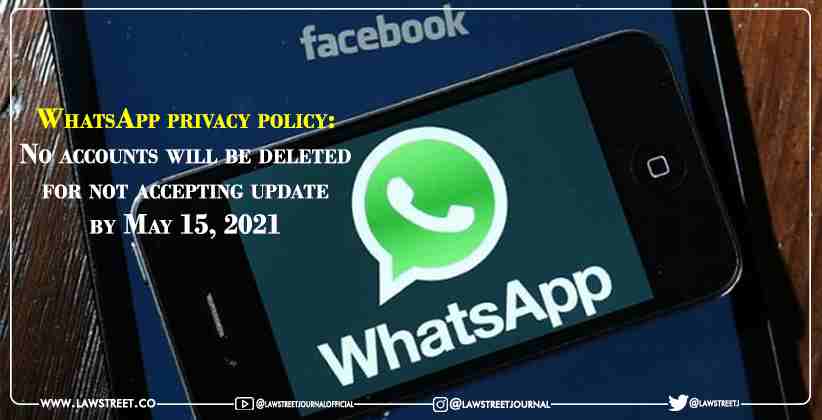 Business May 10, 2021 Snehal Khemka ( Editor: Ekta Joshi ) 7 Shares
7 Shares
Facebook-owned WhatsApp on Friday, May 7, 2021, said that no user account will be deleted for not accepting its privacy policy update, scrapping the deadline for which was set as Saturday, May 15, 2021. The messaging platform is facing a probe by the Competition Commission of India on the policy update, with the anti-trust watchdog taking exception to the company's 'take-it-or-leave-it' approach.WhatsApp had announced a controversial policy update in January 2021 which said that it would be...
Read full post