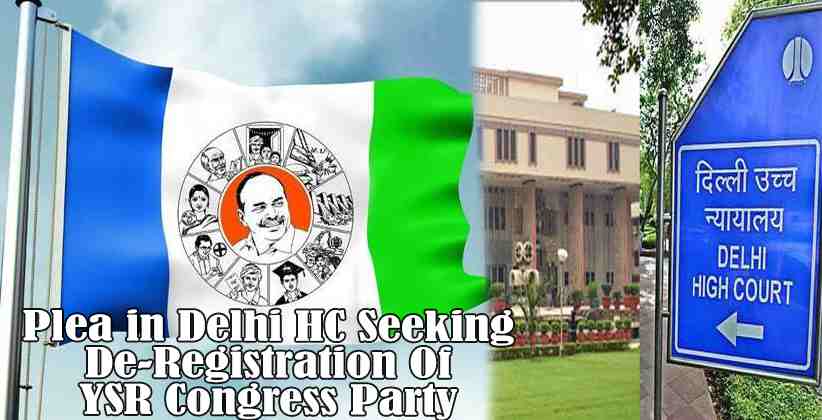 On Monday 13 July 2020, the Delhi High Court sought response from the Election Commission of India (ECI) over a plea moved by Anna YSR Congress Party seeking de-registration of Yuvajan Sramika Rythu Congress Party (YSRCP), which is the ruling party in Andhra Pradesh, for alleged unlawful appropriation of the initials ‘YSR’.

The matter was taken up by a single judge bench of Justice Jayant Nath. The bench has issued notices to both the Election Commission of India and the Yuvajan Sramika Rythu Congress Party.

The petitioner Anna YSR Congress Party seeks the Court’s direction to the Election Commission to withdraw Yuvajan Sramika Rythu Congress Party’s status as a “recognized party” under Para 6A of the Election Symbols (Reservation and Allotment) Order, 1968. The party must also be de-registered under the inherent powers of ECI, added the plea. The petitioner submitted that despite multiple complaints being filed by the petitioner before the ECI, no substantial action has been taken by the latter against the Respondent party.

Pointing out that the YS Jaganmohan Reddy led a ruling party of Andhra Pradesh was registered in the name of Yuvajan Sramika Rythu, the petitioner said that the use of the word ‘YSR’ by the respondent is inappropriate as well as unlawful, and contends that the respondent is illegally using the same on its party pamphlets, letterheads, and collaterals. The petitioner party believes that the Andhra Pradesh ruling party is deliberately and intentionally trying to pose themselves as a part of the Petitioner party.

“This invites de-recognition of a recognized political party under Para 16A of the Symbols Orders and for this purpose, the ECI possesses broad disciplinary/ penal powers. This willful and conscious disobedience is aggravated by the fact that in the past, YSR Congress had applied for and was not granted the right to use the abbreviation “YSR Congress”,” the plea read.

It also said that the respondent is obliged under the laws to use “Yuvajan Sramika Rythu Congress Party” as its name and not its short form “YSR”, it being an integral part of the Anna YSR Congress Party.

“The party (respondent) is guilty of clear, willful, pre-mediated, deliberate, and conscious disobedience” in adhering to lawful directions and instructions of the Election Commission of India, the petitioner submitted.

The Court observed that there seems no urgency in the matter as the YSR Congress was registered in 2011, and the Anna YSR is bringing the matter to the Court’s notice only now. The matter will be next taken up by the Court on 3 September 2020.

The petitioner is a registered political party formed in the estate of Andhra Pradesh on 29 September 2015. It's President and Founder are Shaik Mahaboob Basha. The respondent party was registered on 11 January 2011.