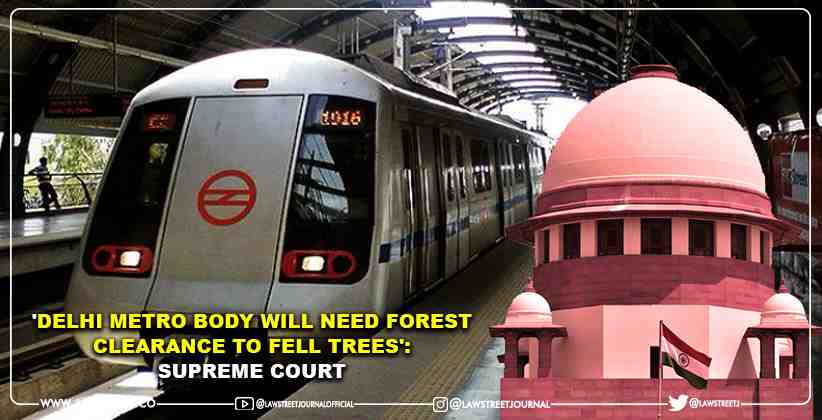 The Supreme Court on November 11, 2021 while hearing Delhi Metro Rail Corporation's ("DMRC") interim application on felling of trees for phase IV expansion plan orally observed that although development could not be stalled there was a need to balance the environment on one hand and development on the other hand.

While the bench of Justices LN Rao, BR Gaval, and BV Nagarathna was reserving orders in DMRC'S application, Solicitor General of India Tushar Mehta appearing for DMRC submitted as follows: 'Suppose I am to go for forest clearance under the Forest Conservation Act, it is going to take one and half years. There would be a price escalation of the project. If they (those opposing the project) want to have the luxury let them deposit the escalated amount of the project."

"You will have to get clearance, Mr. Solicitor General. We will give time to the Union of India to give clearance. We are not going to accept this submission made by CEC that all trees are not forests. We are. not going to accept it. Just see the ramifications of this point being accepted. Who is going to find out whether the tree is natural or planted? It is going to create chaos", Justice Rao, the presiding judge of the bench remarked.

“Government of India has not opposed the metro the way GNCTD has opposed”, General Tushar Mehta added.

Appearing for DMRC, the Solicitor General submitted that the report by the CEC had stated that it was not forested land.

Referring to the contents of the report dated August 10, 2021, submitted by the CEC, SG contended that the project was in the public interest which had to cover a densely populated area of Aerocity.

He further submitted that orders granting permission to the Centre and Delhi Government were issued from time to time for doing activities on Forest Lands, morphological reach areas, and deemed forest for the construction of metro tunnels.

SG also submitted that due to the proposed project, vehicular traffic from IG Airport to Delhi will reduce and compensatory planting will be located on open lands made by DDA. He further submitted that Tulsidas village Dwarka shall be notified as protected forests.

"Compensatory plantation of indigenous proceedings will be undertaken by the Forest Dept of Delhi Government. The cost of raising 34000 saplings will be deposited in advance by the applicant (DMRC) with the Department of the Delhi Government," SG further added.

Advocate ADN Rao, who is assisting the top court as amicus curiae in the matter, said if the DMRC gives an undertaking that let the court decide whether the area of 5.33 km is forest or non-forest and the court finds that it is a forest area then forest clearance, compensatory afforestation and payment of money would be needed.

"Payment of this money cannot hold Delhi to ransom which is facing severe air pollution. Why metro? It is reducing the pollution in the country and caters to a large number of commuters. In 21 minutes flat you reach Airport from New Delhi station," Mr. Rao submitted.

Senior advocate Rajiv Dutta, appearing for intervenors Dr. PC Prasad and advocate Aditya N Prasad, submitted that the Delhi High Court had asked them to approach the CEC with their plea seeking directions to the authorities, including DMRC, to change the nature of the project from overground to underground to "preserve and improve the air quality" and "to ensure that least number of trees are cut in a city like Delhi where the air is already oversaturated with pollutants".

Mr. Dutta stated that the CEC did not deal with the objections raised by his clients and the Delhi government.

He said since trees that are to be axed for the construction of the Delhi Metro corridor between Aerocity and Tughlaqabad fall in the eco-sensitive Ridge area and forest clearance is mandatory.

The counsel for the Delhi government said that the DMRC has to comply with the law and take the forest clearance for the project.

The top court had earlier agreed to consider listing for an urgent hearing the plea of Delhi Metro Rail Corporation (DMRC) alleging that its ongoing construction work has been halted due to lack of requisite permission for felling trees.

"Nearly 3,000 workers are sitting idle and a loss of ₹ 3.4 crores is being incurred by DMRC per day because no construction work is going on due to the lack of permission," Mehta had told the court.

The law officer had said that the DMRC has filed an interim application in a pending PIL, titled TN Godavarman versus UOI, about issues including forest preservation.

Trees are required to be felled in the national capital for DMRC's phase IV expansion plan.

DMRC has identified over 10,000 trees for felling for the expansion work of the Janakpuri-RK Ashram, Maujpur-Majlis Park, and Aerocity- Tughlaqabad corridors and has not got requisite permission for chopping them.