Demanding a deposit of Rs. 22 lakhs for fraud is not a valid bail condition: Bombay High Court 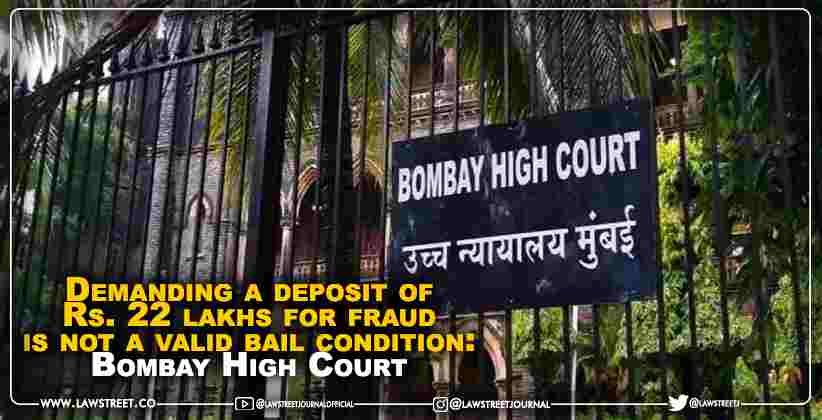 The High Court of Bombay recently overturned an Additional Sessions Judge's bail condition of depositing Rs. 22 lakhs because such an onerous provision for bail could not be maintained.

Since three other defendants in the fraud case had already been given bail, the High Court granted the convicted bail based on parity, though with the same terms as other bails.

While hearing the bail application of Mohammadali Saiyyed, a bench of Justice Sarang Kotwal was told by Lawyer Dr Abhinav Chandrachud that the Additional Sessions Judge, Malegaon had granted bail to the accused on (August 21, 2020) and that in the operative part of the order, his client was ordered to deposit Rs 22 lakh before the magistrate as a condition precedent for his release on bail.

Dr Chandrachud said that his client had first sought bail from a judicial magistrate first class because the charge sheet had not been filed in the time allotted, which the magistrate had granted. However, before Saiyyed could meet the magistrate's bail requirements of depositing Rs 50,000 as a personal bond and providing solvent sureties in the same sum, the police lodged a charge sheet with the court.

According to the indictment, Saiyyed and three others posed as officials of a Gujarat-based financial company and received Rs 22 lakh in commission from a developer named Manmad for handling a loan worth Rs 5 crores. Following the denial of the loan, a lawsuit was filed at the developer's request, and the four were convicted. Although the other three were awarded bail by the HC, Saiyyed was the last to be released because he was the fraud's mastermind.

Dr Chandrachud told the High Court that the additional sessions judge's requirement precedent had been deprecated by the Supreme Court and that because his client could not come up with the money, Saiyyed's right to be released on bail had been frustrated. In light of these arguments, he requested that the bail condition be lifted and that the court award Saiyyed bail.

The complainant's lawyer objected to the plea, claiming that Saiyyed had two passports and could flee if freed on bail. While the condition of depositing Rs. 22 lakh for release on bail was onerous, the state's additional public prosecutor stated that Saiyyed could not be released on bail on merits.

After hearing the arguments, the bench agreed with Dr Chandrachud that the precedent provision was onerous and that it was prejudging the disputes between the parties without a trial. This requirement is based on the assumption that the FIR contains all of the facts and that no further proof is needed. This solution is clearly not acceptable.”

The bench then overturned the precedent condition and awarded Saiyyed bail on the condition that he appear at the concerned police station on the first Monday of each month and be present during the trial, and dismissed the case.

Within four days after receiving the bail warrant. Following that, Saiyyed went to the Additional Sessions, Judge.