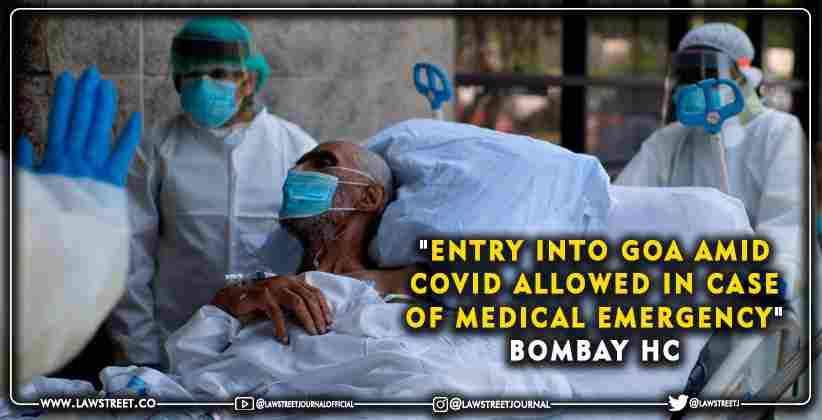 The Bombay High Court while reiterating its earlier Order dated May 6, 2021  has urged  the State Administration  on Tuesday (May 11) to ensure that no one will be permitted to enter Goa unless they have a COVID negativity certificate based on a test done at least 72 hours before seeking entry.

A division bench comprised of Justices MS Jawalkar and MS Sonak, modified  its previous order. The court made an exception for people entering Goa for a medical emergency on the production of proof or those arriving in an ambulance.

It should be noted that a negativity certificate will be required for entry into the state of Goa until this interim order is modified.

The Court noted that despite the clear and unambiguous Order, the two District Magistrates acted independently or otherwise, and  proceeded to make exceptions for Goa residents entering the state; people entering the state for work; and those  who have a Vaccination certificate.

Following that, the District Magistrates made another exception for people entering Goa for a medical emergency on the production of proof or coming in an ambulance.

To this, the Court responded,

"The District Magistrates were bound by our Order and could not have modified or refused to comply with our orders by themselves or otherwise."

The Court did note that an exception could be made in the case of persons entering Goa for a medical emergency on the production of proof or those arriving in an ambulance.

As a result, the Court granted permission to make such an exception in the orders that will be issued this evening.

The Court proposed hearing the parties' counsel on the issue of oxygen supply on May 12, 2021, i.e. tomorrow. Furthermore, it stated that affidavits explaining the actual situation at the hospitals would be required for us, in order to understand the issue.

According to the Advocate General, the Dean of Goa Medical College and the Director of Health Services will file such affidavits by tomorrow, detailing the status of oxygen supply at the Goa Medical College Hospital, as well as the South and North Goa District Hospitals and the ESI Hospital.

The Court started that the affidavits must be filed by the noted date in order for the Court to consider the matter in this regard. Advocates Akash Rebello, Rui Gomes Pereira, and Varun Bhandanker appeared on behalf of the Petitioners.