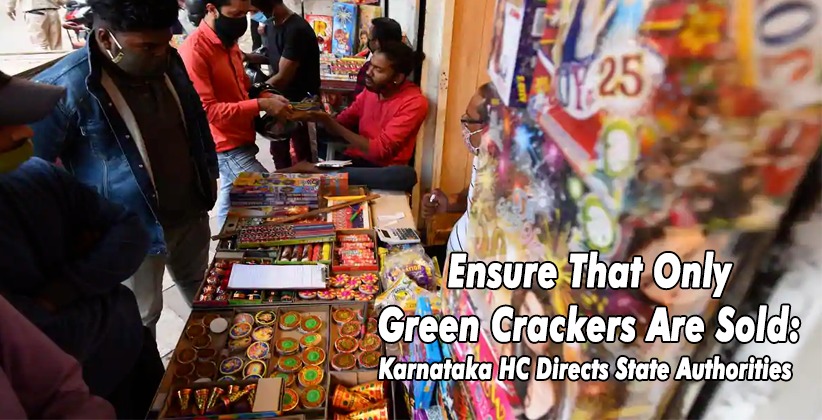 Judiciary Nov 16, 2020 Atharwa Gauraha ( Editor: Ekta Joshi ) 2 Shares
2 Shares
The Karnataka High Court ordered the State Government to strictly ensure that only 'green firecrackers' containing the CSIR-NEERI and PESO distinct, green logo and the Quick Response (QR) code on their packaging are sold in the State.

In order to ensure that only 'green firecrackers' were sold, the Court also ordered approved policemen, police, and local authorities such as city councils, municipalities, and the Karnataka State Pollution Control Board (KSPCB) to regularly inspect stalls selling crackers. The Court asked the government to provide large publicity across various media outlets, including new television and social media networks, to increase awareness of green firecrackers. It said, before making cracker purchases, the public should be asked to look for the green logo and QR code.

The directions were given by a division bench comprising Chief Justice Abhay Shreeniwas Oka and Justice S. Vishwajith Shetty after the government, acting on the court's observation on Thursday, issued a notice explaining what green crackers constitute and how they can be detected late Thursday night. The Bench, during a hearing on Thursday, had pointed out that the government’s order of allowing only “green firecrackers” was “ineffective” as it did not specify what such crackers were and how the public could identify them. “The green firecracker packing can be identified through the distinct, green logo of the National Council of Scientific and Industrial Research-Environment Engineering Research Institute (CSIR-NEERI) and Petroleum and Explosive Safety Organisation (PESO), as well as QR code system. The QR code is a novel feature incorporated on the firecrackers to avoid the manufacture of and sale of counterfeit products,” the government said in the Thursday night notification, submitted to the Court. "The green firecrackers are those produced on the basis of chemical formulations developed by the CSIR-NEERI and PESO, and they do not contain harmful chemicals, thereby minimizing air pollution... The general green crackers are available as sparklers, flowerpots, maroons, etc. the November 13 government notice explained. Clarifying the observation on Thursday that a strict order prohibits crackers as pleaded by the petitioners, A.S. A social organization, Vishnu Bharath of Bengaluru and Samarpana, cannot be released as the petitioners had approached the court in the eleventh hour, the Bench adjourned the hearing until November 23, ordering the State and its authorities to enforce standards for air and noise pollution control, and only 'green firecrackers' for sale and use.