Home Judiciary "Every Tom, Dick, and Harry Should Not Be Brought To This Position": The Orissa High Court overturns its own rule allowing senior designation without a proposal or application [READ ORDER]
Judiciary

"Every Tom, Dick, and Harry Should Not Be Brought To This Position": The Orissa High Court overturns its own rule allowing senior designation without a proposal or application [READ ORDER] 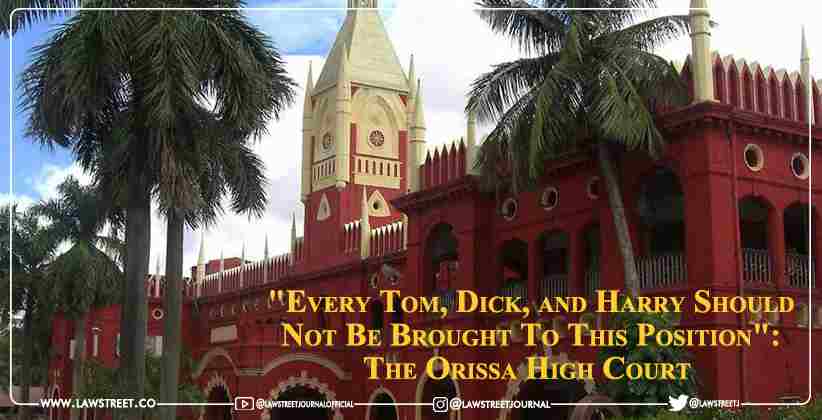 On Monday (May 10,2021) the Orissa High Court struck down Rule 6(9) of the 'High Court of Orissa (Designation of Senior Advocate) Rules, 2019', which gives the Full Court the power to appoint an Advocate as Senior in the absence of a proposal from the Judges or an application from the Advocate.

The Rule, according to Justices CR Dash and Pramath Patnaik of the Division Bench, is inconsistent with the Supreme Court's guidelines for conferring senior designation in the Indira Jaising case [Indira Jaising v. Supreme Court of India, (2017) 9 SCC 766].

The Bench noted that the Supreme Court acknowledged two sources for drawing advocates for the designation of "Senior Advocate" in the said judgement. One source is the written proposal of the Hon'ble Judges, and the other is the application of the concerned advocate. There is no third option for selecting an advocate through suo motu force.

"The Supreme Court has not thought it proper to include exercise of suo motu power by either the Supreme Court or other High Courts so far as designation of "Senior Advocate" is concerned," the Bench said. It emphasized that the Supreme Court's silence on third source of picking through suo moto power is a "conscious silence".

The Bench was hearing a writ petition filed by four Advocates challenging a notification issued by the High Court in August 2019 in which the Full Court named five Advocates as Senior in exercise of its powers under Rule 6 of the Supreme Court Rules, namely I Bibekanada Moanti, (ii) Gautam Misra, (iii) Debi Prasad Dhal, (iv) Gautam Mukherji, and (v) Durga Prasa (9).

The Bench, finding the notice to be discriminatory, has requested the Full Court to reconsider the classification of the above-mentioned Advocates, as well as 43 other applications it has issued. It has been explained, however, that the contested notice will remain in force until the Full Court makes a decision.

It held, "There is no material before us to reach a conclusion that applications received from all the applicants were examined in detail or the compilation made by the Secretariat containing relevant data and information with regard to the reputation, conduct and integrity of the advocates concerned of all the advocates was examined in detail… There is also nothing on record to suggest that the datas and materials were placed before the Full Court to apply it's mind. Suo motu power is not a power to be exercised ordinarily. It is a power to be exercised sparingly with circumspection in rare cases. We do not find any such rarity in the present case for exercise of power under subrule (9) of Rule- 6 of "2019 Rules". We are, therefore, constrained to hold that the entire process of conferring designation of "Senior Advocate" on Opposite Party Nos.5 to 9 is discriminatory."

It added, "Opposite Party Nos.5 to 9 having been graced by the Hon'ble Full Court with the designation of "Senior Advocate", we do not want to disgrace them at present by withdrawing the designation, as there is no fault on their part in the entire exercise. Tomorrow, the Hon'ble Full Court may rethink after exhausting the process under Rule-6 of "2019 Rules" to designate them again as "Senior Advocates", as according to our view, they are deserving, but there may be contrary decision also.

Though we have declared sub-rule (9) of Rule-6 ultravires, we do not propose to strike down the Notification No.1378, dated 19.08.2019 for the present. It would only cease to be after a decision is taken by the Hon'ble Full Court on the matter regarding designation of "Senior Advocate" is placed before it after exhausting the entire process under Rule-6 in which process applications of Opposite Party Nos.5 to 9 shall also be taken into consideration."

The Supreme Court's sole criterion for developing criteria for framing senior classification rules is the need for "maximum objectivity" in the process, in order to ensure that only the most worthy and the very best are given the honour and dignity.

The Bench also addressed the locus standi of Petitioners to retain the writ petition, who had also applied for classification, during the hearing. The petition is maintainable, according to the Court, since the Petitioners and the Opposing Parties are not rivals in terms of their argument. "The petitioners may be conferred with the designation of "Senior Advocates" tomorrow after the process under Rule-6 of "2019 Rules" is over. But being advocates they have a vested and existing right to call in question the rule which creates a separate group within a particular group," it held.

Before parting, the Bench made the following observations:

(I) He is an Advocate with towering personality. He is suave and gentle. His disposition towards the Court and his fellow counsels is impressive. He is known for his ready wit. Ask him any question on any law, he has an answer with reasonings. His standing in the Bar is remarkable. He is a social factor in the society, he lives. He is humble, dignified, kind and a person with sobriety. He would however not come to stand in a queue to file an application for being designated as "Senior Advocate". Such a person being an asset to the profession, suo motu power should be reserved to be exercised for such a person only and such power should be given to the High Courts, as in our understanding, such power has not been given to the High Courts in the guidelines/norms framed in Indira Jaising case.