Evidence of interested person can be considered if corroborated by other evidence on record: SC [READ JUDGEMENT] 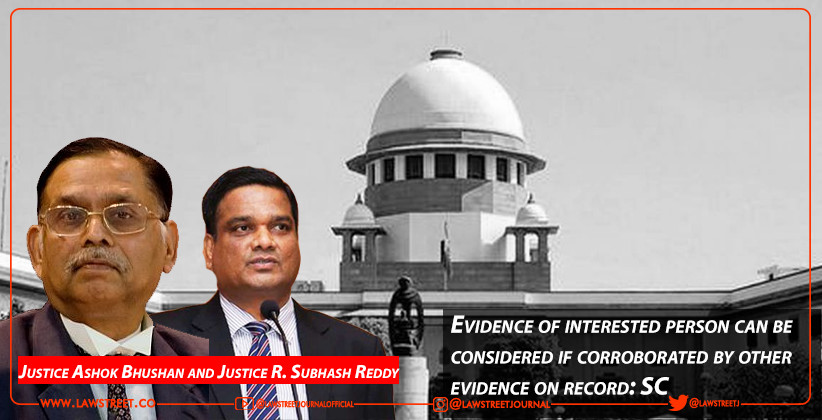 Judiciary Mar 08, 2021 Aditi Aggarwal ( Editor: Ekta Joshi ) 63 Shares
63 Shares
A bench comprising of Justice Ashok Bhushan and Justice R. Subhash Reddy of Supreme Court on Wednesday (March 3, 2021) observed that the evidence of interested person can be considered provided such evidence is corroborated by other evidence on record.

“A close relative who is a natural witness cannot be regarded as an interested witness,” the court observed.

In the case titled Rahul vs. State of Haryana, the accused(Rahul) was concurrently convicted in a murder case. The prosecution case was that the accused had murdered the deceased because of the alleged relationship between his wife and the deceased.  Contention of the parties:

Before the Apex Court in appeal, it was contended that two witnesses in this case, are brother and mother respectively of the deceased, and thus are interested witnesses and the conviction is based on the testimony of these interested witnesses, to prove that deceased was last seen with the accused.

Opposing this contention, the state contended that merely because witnesses who are brother and mother of the deceased were examined to prove the case of the prosecution, same is no ground to discard their testimony, if the same is corroborated along with other oral and documentary evidence on record. Observation of the court:

“Merely because PW­3 and PW­12 are related, by itself is no ground, to reject their testimony. Further, a close relative who is a natural witness cannot be regarded as an interested witness. It is fairly well settled proposition that even the evidence of interested person can also be considered provided such evidence is corroborated by other evidence on record,” the court observed. The bench also referred to the decision in Ram Chander & Ors. v. State of Haryana (2017), in which it was observed that:

“There is no proposition in law that relatives are to be treated as untruthful witnesses.”

Taking note of the other evidence on record, the bench found that prosecution has proved the guilt of the accused beyond reasonable doubt by leading cogent evidence.

“If we closely scrutinise the oral evidence on record peppered with the documentary evidence, we are of the considered view that there is a complete chain of evidence which would lead to irresistible conclusion that the appellant accused has committed the offence and none else,” the court observed.